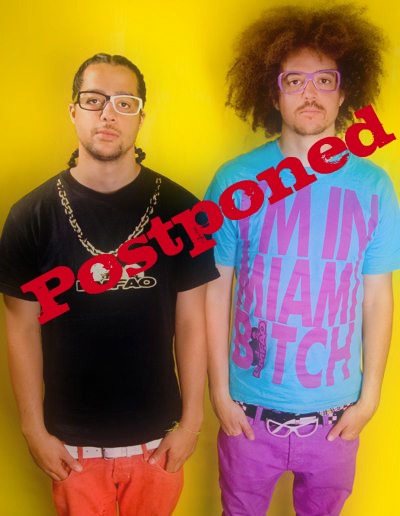 Western Canada got quite a shock today when it was announced that, just a few hours before their Calgary show, LMFAO would be postponing the remaining of their Canadian tour dates.Â  They were to play in Calgary tonight, Edmonton tomorrow and Vancouver on Friday.

The band, which had one of the biggest songs of the year with “Party Rock Anthem”, cited a severe back injury sustained by lead singer Sky Blu. Â Sky attempted to perform the remaining shows from a mobility chair but only completed one before a physician declared himÂ unfit to perform and explained the severity of the injury. Skyâ€™s doctor has diagnosed him with three herniated discs and prescribed a full month of rehabilitation with no travel or performances.

Fans were understandably upset, some even tweeting that the reason the concert was canceled was because of low ticket sales, though I don’t know if that was the case.

TSN’s Jay Onrait even weighed in with quite a clever explanation for the postponment.

No new dates have been officially announced, though Live Nation will issue new dates and ticket information in the coming days.

*Weirdest sentence that I’ve ever typed.

“On Thursday, LMFAO announced the rescheduled date and venue of their Calgary concert will be on February 7th at the Scotiabank Saddledome.

Ticketmaster will automatically reassign you to comparable seats at Scotiabank Saddledome.Â  For those customers who have provided email addresses, electronic tickets will be sent out no later than Friday, January 6th. There is no need to contact Ticketmaster unless you do not receive your tickets at that time.

Those customers who purchased at outlets will also be allocated new seats that are comparable.Â  They can go to the Scotiabank Saddledome box office anytime after Fri, Jan 6th with their tickets and we will exchange them out.

For those who cannot attend the new date, please contact Ticketmaster for a full refund by January 13th. “