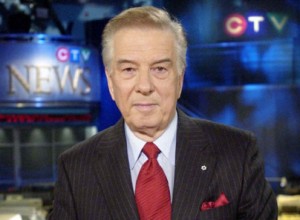 Well it looks like September 1st will be a very sad day for a lot of Canadians from coast to coast.

CTV announced today that the first day of next month will mark the final time that Lloyd Robertson will anchor the CTV National News.Â  A sad day indeed.Â  Although we all know that his time was coming to an end, it does make it any less easy.Â  I’m telling you know, on September first, I will be inconsolable.

I’ve always had an interest in news and for years I’ve been staying up to 11pm just to watch the news with Lloyd.Â  As the years have gone on, he’s been consistently there, no matter what was going on in my life or anyone else’s, Lloyd was there. My favourite is when Robertson is forced to report stories on Facebook or Twitter.Â  Like he even cares about that stuff, he is Lloyd Robertson, he is way better than social media!

CTV is definitely giving Robertson the sign off he deserves.Â  Also airing on September 1st, Lloyd Robertson- And that’s the kind of life it’s been will give viewers a glimpse into his life beyond the anchor desk.Â Â  Leading up to his last day, CTV National News will also air vignettes from Robertsonâ€™s most memorable newscasts included.