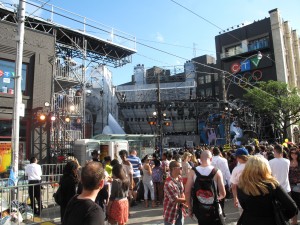 Since flying into Toronto yesterday, the whole has been talking about the MMVAs and I’m so excited that they are finally here. Â It sounds a little cheesy, but I’ve always wanted to check out these awards since I was a little kid and it is very cool to finally be here!

I’m set up back stage and normally I would live to live blog. Â Unfortunately MuchMusic apparently doesn’t believe in wireless. Â So I’m going to have to run back and forth and keep plugging my computer in!

So just like every award show, Mike’s Bloggity Blog will be on a time delay. But I am backstage and I’m expecting a ton of talent back here! Â Stay tuned!

Before the show: The biggest story of the MMVAs have been the intense crowds that have circled the block for days. Â The girls love the Justin Beiber and they are willing to do anything just close to him! Â Unfortunately, the girls also left their mark on the streets of Toronto: 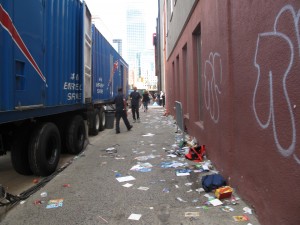 Unforunately I didn’t get Red Carpet accreditation. Â Even though I tried, I couldn’t break through the Toronto media circle. Â I was coming to terms with until I saw this: 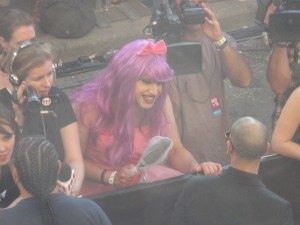 Now if this doesn’t scream respected media source I don’t know what does. Â Sigh. Â The life of a blogger from Calgary. Â You win this time Toronto.

So for now, my view is this: 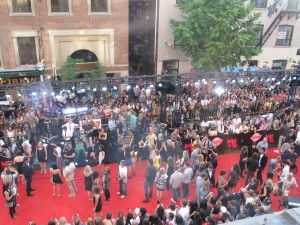 You know how media always does all those crazy interviews backstage? Â As you can imagine it is very competitive, so how do make sure you get all the celebrities in your room? Â This is how 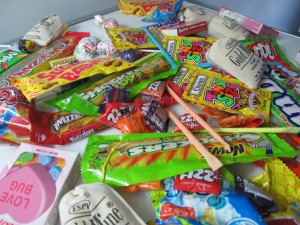 9:00pmÂ  Miley starts the show and evitedently forgets to get completely dressed.Â  She decides to go on anyway. Justin Beiber came out and tried to give her a scarf and she danced away from him.Â  Thus making her the only girl to every walk away from Justin Bieber.

9:05Â  Down with Websterâ€™s performances was the most talked about performance on twitter all week and they disappointed.Â  With a complete 12 piece showband, they drove the girls 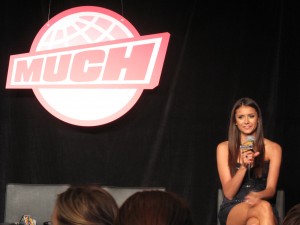 9:06pmÂ  Nina Dobrev has already come backstage.Â  â€œDegrassi was high school and Iâ€™m going to keep growing.â€Â  I asked her about coming back to Canada for projects and told me that it was strictly a scheduling thing but really hoped to!

9:12pm Pauly D and Snooki just came back stage. This is her first time outside of Canada!Â  Sheâ€™s also dropped the headbump.Â  Looking into if those are related!

9:24pm While Adam Lambert is performing outside, the cast of TwilightÂ  is back stage.Â  Ashley Green, Kellan Lutz and the new guy are friendly, but the questions all seem to be for Lutz.

9:25: Â I just did the coolest thing! Â I got a bad picture of the cast of Twilight! Â Somehow it made me feel better. 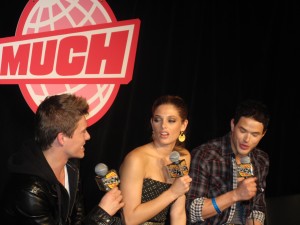 9:27pmÂ  I can barely see what is going on outside, but it looks like Drake one something!

9:35pm I just got a picture with Emily Osment. I just became the coolest uncle ever. 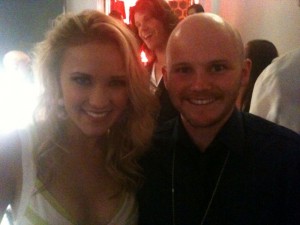 9:41pm Â Bedouin Soundsclash have made their way backstage. Â They seem less than enthused to be here. 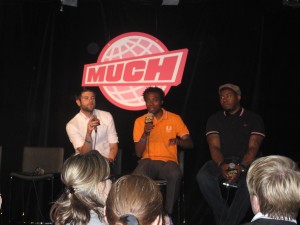 9:50pm Â I seriously can’t emphasize how freaking busy the pressroom is. Â I honestly don’t know who has won a single award. Â There is stuff happening all over the place. I’m dying. Â (By dying I mean enjoying the open bar.)

10:05pm Â I just got pictures with Miranda Cosgrove and Jessica Szohr. Â One is for me, one is for my niece. Anyone want to guess who is for who! 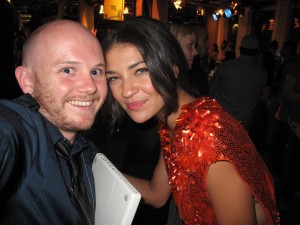 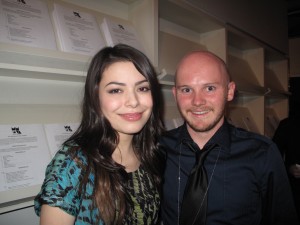 8:11pm Â Emily Osment would like everyone to dance on the SodaPop tour. Â She’s the most well-spoken person I’ve heard all night. 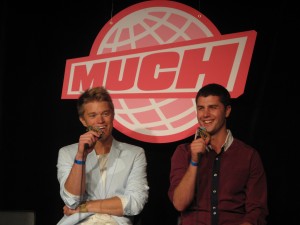 10:16pm The Buried Life have come backstage. Â Okay, only have of them. Â Ben is here. Anyone want to ask the Whitney. Â Interestingly enough, they talked about how MTV doesn’t help them get any of the checks off of their lists. Â They don’t want help. Â They say it is about four guys trying to do incredible things.

10:45pm Okay, so I’m falling behind. Â The backstage is essentially two floors and there are people everywhere!!! Â I just tried stalking Whitney Port and failed miserably! Â I also just walked Ke$ha and she looked so freaking rough! Â It was unbelievable. Â I seriously thought she was Kim Catrall.

10:52pm Bieber just won an award for UR Video. Â This is seriously the first award I’ve seen handed out.

10:55pm Just realized that Perez Hilton never made it make to the press room. Â No one cars.

10:56pm Miley does her best Thriller impression with her second number of the night Can’t be Tamed. Â Yes, those are dead barbie dolls on sticks! Â A final goodbye to Hannah Montana.

11:01pm Backstage Karl Wolfe is talking now. Â I am going back in the washroom line, it is more interesting.

11:20pm Just had an awesome chat with Johnny Hawkin and Aliya Jasmine from MTV. Seriously cool guys. Â For a second I forgot how tired I am!1 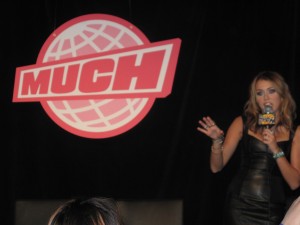 11:25pm Miley was just backstage and she was really nice and well spoken. Â I know you wouldn’t know it, but she has a great sense of humor. Â Definitely an old soul.

11:30pm Justin Bieber was next and awkwardly admitted that he going through puberty. Â I don’t remember anyone asking!

And with that, this year’s MMVAs are done! Â Wow. Â What a freaking whirlwind! Â I obviously freaking loved every single minute of it. Â And if you know anything about award shows, you know the night is really just about to start!

Bonus: Â Daniel from The TV Addict was backstage with me. Â For a more organized and less chaotic look backstage, make sure you check out his blog!

Chris from Out is Through was there too!