Live from PEI: It is Regis and Kelly! 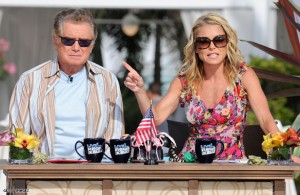 Are Regis and Kelly coming to Canada? More specifically PEI?

While in parliament yesterday, Opposition MLS Jim Bagnall let the cat out of the bag when he asked why the province was spending $750,000 on getting the famous talkshow to film on the teeny-tiny island!

The governement’s response was a suspiciously vague: “We’re in negotiations with a lot of different people.” Roughly translated, it means: “Yes we are, I can’t believe you freaking ruined the surprise. Â Why are you such an ass? Â And don’t act like you won’t try to win the audience prize of $500 worth of steaks, when they are filming here.”

Whether Regis and Kelly actually get to film in PEI, you have to give props to the province’s tourist office because they’ve already convinced country superstars Taylor Swift and Keith Urban to do shows near the home of Anne of Green Gables!