Phew. That was close. I just landed and after an Amazing Race-style fight for cabs, we’ve finally made it to St. John’s and more specifically The 2010 Juno Gala Dinner and Awards. Most people think that the Juno Awards are only one night, but the awards are actually spread over two nights.

Tonight they’ll be handing out 37 awards and there will also be performances by my (secret) best friend Carly Rae Jepsen, Alex Cuba, Amelia Curran and Mistress Barbara. The Arkells are opening the show!

I’m hanging out back stage and will be chatting with the winners all night. This is going to be fun! Happy Junos everyone!

6:20pm: After a late start the Arkells take the stage and have a rocking opening in front of the music industry elite.

6:22pm: Seamus O’Regan is MC’ing the gala and opens with lots of jokes about the weather. “It could have been worse, it could have been volcanic ash.” and “The Junos live from the Halifax International Airport just doesn’t have the same ring to it.”

6:30pm Newfoundland Premiere Danny Williams. “Anytime there is a natural disaster or something that needs attention. It is the Arts community that steps up. It is exceptional.” He has more personality than Ed Stelmach’s ever had.

6:40pm The first award of the night is the International Album of the Year. It goes to Kings of Leon. Suck on that Taylor Swift. (Just joking, I love you….sometimes too much.)

6:41pm Second award of the night is Francophone Album of the Year and Andrea Lindsay wins it. She isn’t there too accept her award.

6:44pm No one is here to accpet their awards. That include Blues Album of the Year winner The Corktown Sessions.

6:45pm Appropriately named Dubatix ft. Prince Blanco wins Reggae Recording of the Year. Double shocker: They are here and they are white?!?

6:50pm This year’s Recording Engineer of the Year is Dan Brodbeck.

6:53pm My new best friend Joel Plaskett just won Adult Alternative Album of the Year. He’s not here to accept, so I’ll just a picture of me and him instead. 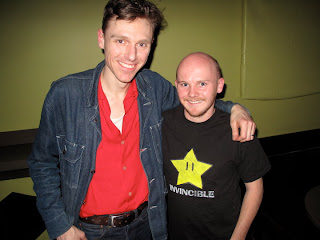 6:56pm: Carly Rae Jepsen has the night’s second performance. She did awesome, especially considering her and her band had no soundcheck. They’ve been with me in Halifax since Thursday!

6:58pm: Jian Gomeshi presents the Rock Album of the Year to Billy Talent. Gomeshi says that the Canadian music industry is “quite strong” and we should be proud of that.

7:02pm I just spoke with Raggae Winners Dubmatrix about reggae in Canada. They say there are pockets of it in Canada, mostly Toronto, Montreal and Vancouver. Mostly they have to go internationally. 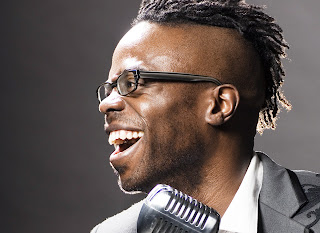 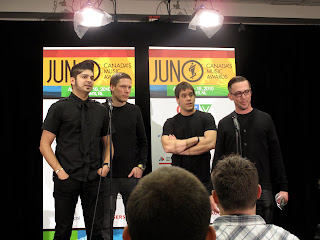 7:15pm Just talked to Billy Talent. They told me that despite six Junos, they are always just playing for the fans. Awesome guys. Fun fact: I used to wait tables at a lobster restaurant, the guys once came in and I made them wear bibs. I decided not to remind them.

7:18pm The classical awards are next. Solo or Chamber goes to Joel Quarrington, Large Ensemble goes to Mathieu, Shostakovich, Medelssohn, Vocal or Choral Performances winner is Adrianne Pieczonka and Lament in The Trampled Garden win Classical Composition of the Year.

7:20pm The Arkells just won New Group of the Year and the audience went nuts. This guys are definitely room favorites.

7:27pm Haydain Neil‘s wife is in the press room talking about the spirit of the jacksoul singer. She is a strong woman.

6:30pm One of my fav’s, Alex Cuba is now on the stage. Time for me to find something to EAT! 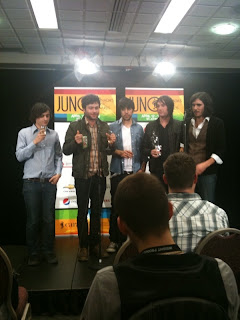 6:35pm: The Arkells have made there way backstage. They have a new single called John Lennon. It’s not out yet, but it will be released. It is the last one from their debut record.

6:4opm The Juno for the Aboriginal Album of the Year goes to Digging Roots. Luckily, they’ve made it!

6:55pm The Video of the Year went to Marc Ricciardelli. He won for Serena Ryder‘s Little Bit of Red. I’m not allowed posting the actual video, but you can click here to watch it. In the interim, here is the unofficial video: 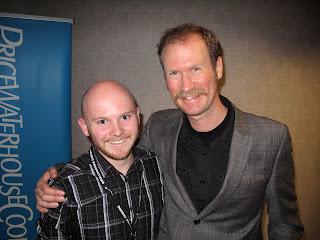 (long break)I’m falling behind. There is so much going on! I got distracted by Charles Spear

7:00pm Let’s get you all caught up. The Contemporary Christian/Gospel Juno went to Matt Brouwer for Where’s Our Revolution. And instrumental album goes to Belle Orchestre.

7:03pm Michael Buble just did the impossible and beat Justin Bieber for Pop Album of the Year. He wishes Justin Bieber was there so he could flick his hair, he would say: “Just do it motherfucker!” 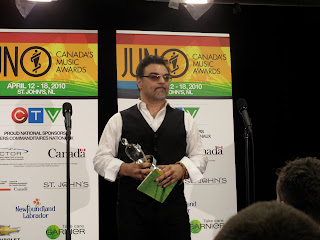 7:08pm World Music Album of the Year goes to Dominic Mancuso for Comfortably Mine. He calls it his “hat trick.”

7:10pm Country Album of the Year goes to….(no shocker here)….Johnny Reid. “Needless to say, I come from a different country. I love being a part of this music community.”

7:15pm Recording Package of the Year went to the very grateful Martin Bernard, Stephane Cocke and Thomas Csano. The Telegraph is happy because they “really deserve it.”

7:16pm Music DVD of the Year was won by Iron Maiden Flight 666. Why don’t they have a mix CD Juno? I think I make awesome Mix CDs. 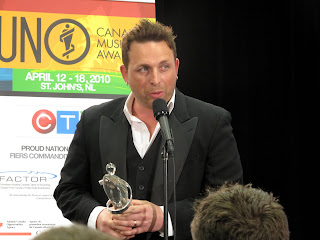 7:22pm Johnny Reid has just walked into the room. He may be this year’s coolest Juno winner ever. (Although I think his accent is fake.)

7:28pm: People backstage are talking about Iron Maiden songs. I’m at a lost.

7:40pm After some more speeches, Misstress Barbara has the night’s last performance. Very cool. She’s nominated for Dance Recording of the Year. They wouldn’t make her perform and then give it to her would they?

7:46pm Yes! Metric wins best Alternative Album of the Year for Fantasies! I was stuck in the airport with them, I’m so happy they made it and are here to win their award!

7:49pm And the winner of Dance Recording of The Year is……

Deadmau5. So yeah, I guess they could do it to Misstress.

7:51pm Roots albums are next. Hometown girl Amelia Curran wins Solo of the Year. She actually got her start playing on the corner of George St. Maybe I’ll try that tonight too.

7:53pm: Good Lovlies win for Roots Group of the Year. Sorry Great Lake Swimmers fans. But the Good Lovelies are good too, right?! Sure they are! 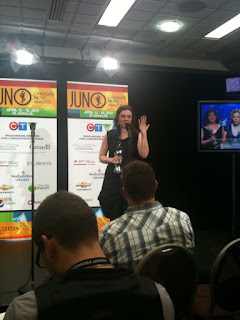 7:56pm Amelia Curran just came backstage. “I hope my parents are having a drink.” She’s going on tour for two months, find her now.

7:57pm The last award of the night is Artist of The Year and it goes to crowd favorite, K’Naan. Easily the biggest cheer of the night!

7:58pm The audience is listening to K’Naan‘s every word. The world is right.

8:00pm That is all of the awards, but the stars are just coming back stage now. Keep checking in! 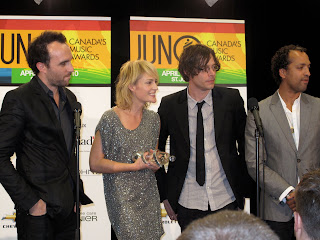 8:02pm Emily Haines just called our pressroom terrifying. I’m offended but she is so sparkly. They also confess that none of them own TVs. How do they see that they are featured on Grey’s Anatomy every week?

8:13pm The Good Lovelies are the last band coming to the pressroom for the night! Am I an ass for never hearing of them? Very pretty though!

And that’s a wrap on the Gala night! What an amazing night. We still have seven more awards to go. It is going to be pretty crazy, make sure you come to see what happens Sunday night!