We are a couple of hours away from the start of the 2010 Juno Awards! As you know, the actual Junos celebration is spread out over almost an entire week and tonight is the huge culmination. 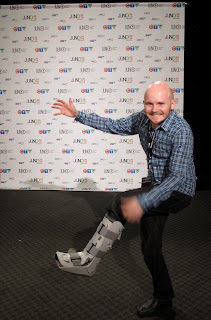 Last night, over thirty Junos were handed out. If you want to see all the winners, click here. Tonight another 7 awards will be won! I’m guessing, mostly by Michael Buble.

While CTV will show you what is going on stage, I’m backstage all night and will live blogging,. I’m looking forward to finally experiencing Bieber fever and seeing what the fuss about Drake is all about.

3:20pm Most of the night’s events will be taking place in and around the Mile One Centre. Here are some pics of people putting the finishing touches on the Red Carpet and the Juno Stage which will be on George Street. 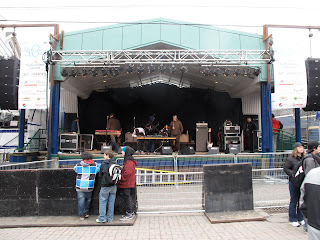 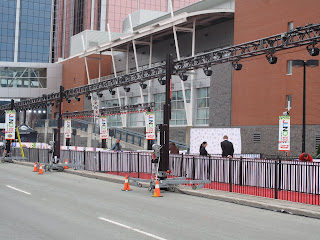 Before the night begins, I got the chance to interview Tiffany Astle who is the national media relations manager for the Junos. Chris McDowall is the VP of Holmes Creative. Since the Junos are such a serious event, I thought it would only be appropriate to ask very serious questions. 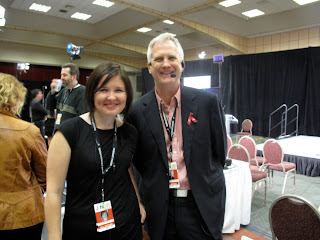 What temperature do you have before you know you diagnose yourself with Bieber fever?

If you could win a Juno, which one would it be?

Tiffany:I would win the award for best publicist, it would require a whole new award, but it is what I deserve. It would be black and gold, to compliment my outfits.

Who would accompany you down the red carpet at the Junos?

Tiffany: I would take you to help make you famous, but let’s be honest, it would probably be Jason Mraz.

5:07pm We are about to head out to the Red Carpet. There we will stand for 90 minutes until people start coming. It’s freezing. BUT I do have a little bit of a buzz-on and warm gloves. What more could you want! 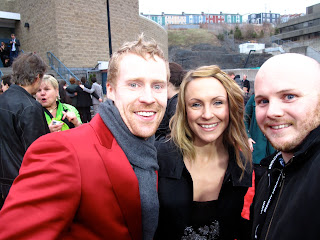 6:20pm Olympic Gold Medalist John Montgomery is still riding his Vancouver 2010 wave. He’s hoping not to go back to work anytime soon. His girlfriend and him are both setting their sights on Sochi 2012! Yes, he has a girlfriend. 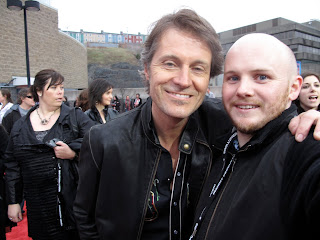 6:35pm Jim Cuddy admits to not being very good at having an online presence but calls it one of the most important tools for new and emerging artists. 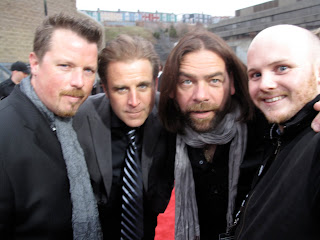 6:4opm I used to sleep in a parking lot over night just to get Great Big Sea tickets. Years later, the guys are just as cool. Their tenth studio album comes out this year! 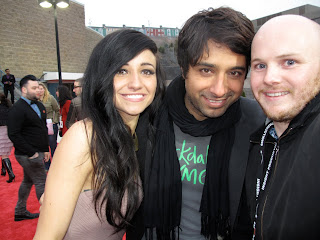 6:47pm “Don’t put anything out that you don’t absolutely love. You have to love what you do.” -Lights.

6:55pm I almost sorta got Bieber Fever. Call it Beiber-lite: 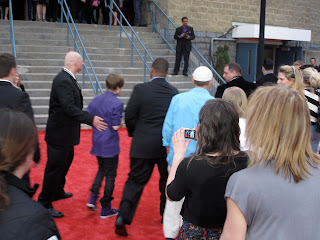 8:01pm Classified opens the show down on George St! The whole street packed and singing our newunofficial anthem, “Oh Canada.” 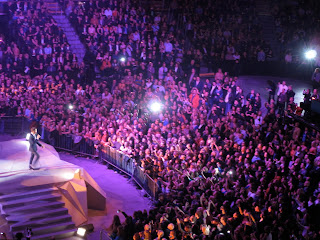 8:05 Michael Buble is next and he elicists one of the loud
est screams I’ve heard. Especially when he goes into the audience to sing “Haven’t Met You Yet.”

8:10pm The Barenaked Ladies come out to announce the nightâ€™s first award. BNL confirms that no one is hosting. Obviously they ignore that I would have done for free.

8:12pm Michael Buble wins the night’s first award, Single Of The Year. He says he is nervous, do you believe him? He doesn’t seem like the guy who gets too nervous! 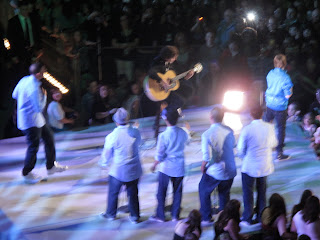 8:20pm Justin Bieber comes out to perform surprisingly early. He switched earpieces SECONDS before the camera went to him. He looked TERRIFIED.

8:21pm And now Drake has joined Bieber on stage! I told you this was going to happen!

8:26pm Fan Choice winner Lyndsey screams that Michael Buble wins the Fan Choice Juno. I talked to her on the red carpet and she wanted Drake to win, but Buble will do!

8:28pm My mom’s boyfriend Johnny Reid performs his big hit, Dance With Me. Reid has three upcoming sold out shows in St. John’s. That is quite an accomplishment!

8:37pm Nikki Yanofsky gives a little bit about Musicounts. Fun fact: On the Red Carpet, I had to ask her publicist if she was Nikki or Eva Avila.

8:39pm Back in the pressroom, a journalist has brought the cutest eight year old kid. He just said he was sick of talking about Bieber and that “all boys hate Bieber. ” Smartest 8-year old ever.

8:41pm Does Shiloh have an accent? Isn’t she from Edmonton?

8:45pm After Billy Talent‘s performance, K’Nann introduces Bryan Adams as the winner of the Humanitarian Award. Sadly, Adams was one of the victims of the volcanic-ash aviation disaster and never made it into St. Johns. Can we give it to him next year?

8:48pm Fun fact: There is an open bar in the pressroom. Oddly enough, they are serving Big Rock, which is brewed in Alberta. I want some BlueStar damnit!

9:00pm Sadly K’naan beats my (secret) best friend, Carly Rae Jepson for Songwriter of The Year. But if anyone was going to win, he certainly deserves it.

9:05pm The Junos used to have a bad reputation for just awarding the Top 40 artists. Ladies and Gentlemen, may I please introduce you to the always awesome Great Lake Swimmers.

9:10pm Probably the most competitive category of the night is the New Artist Of The Year. Again, Carly Rae lost but this time it was too Drake. I think I agree with that one even less, seeing as how he doesn’t even have an album out

9:12pm Metric is on stage, as Michael Buble comes backstage. We get to see him early! 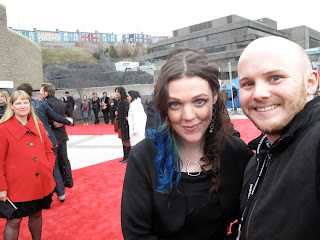 9:15pm Amelia Curran gets to talk about the Junos Gala Award. I’ve taken to her a couple of time this weekend and she has been absolutely awesome. So grateful and professional. 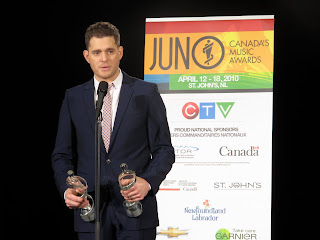 9:25pm Can the Blue Rodeo please write the soundtrack for my life?

9:30pm Sadly, I missed the April Wine train. I call this my strech and bathroom break!

9:45pm Okay, I got distracted by the weather news. What did I miss? April Wine? Anything else?

9:46pm Drake picks up his second award of the night, Rap Recording of the Year. Sadly, he doesn’t thank the cast of Degrassi!

9:47pm: The first sign that we are almost done, “The official sponsors of the Junos were….”

9:50pm And the night’s last award goes to Michael Bubble for Artist of The Night…or whatever Alexandre Bilodeau said! The press room died. So funny!

9:56pm The show closes out with K’naan’s Waving Flag. He is joined on stage by Drake, Nikki Yonowski, Justin Bieber and a whole bunch of others! What a great way to close an amazing night! 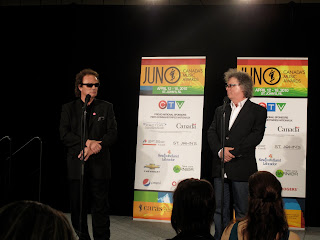 9:55pm Loverboy just came in the room. “Before the band was put together, I was never interested in sounding like anyone else.” They also talk about how they’ve been raising money and awareness for juvenile diabetes. This is obviously a cause that is very important to them.

10:05pm I asked them what they thought about the Canadian music industry. They agreed that the copy write laws are important and that as long as musicians are making money, it’s a good thing.

10:11pm I just asked them what’s next, they said to win an Oscar. My suggestion? Precious 2.

10:12pm Emily Haines to new artists: “Don’t let anyone sign you and your music for any less than you deserve. And don’t let anyone tell you can’t do exactly what you want to do.”

10:18pm Waiting for Drake to make his way back stage. It doesn’t look like Bieber will be showing up. I got that needle for no reason. 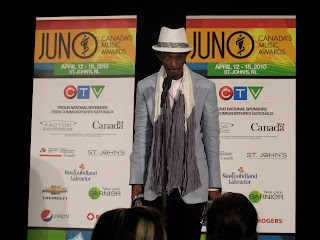 10:20pm K’Naan just walked in. I asked him about Canada’s efforts in the recent international disasters: He says that he doesn’t “like to think in terms of “enough”, but we could always do more.” 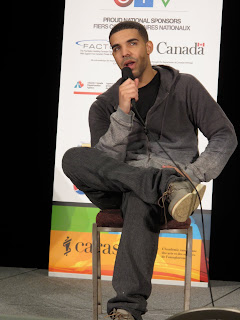 10:22pm Drake just walked in. He pulls up a chair and has a seat. I asked him about being so comfortable, “When you think too much about what you have to do, it’s not good. You have to be comfortable in what you do.”

And with that, the Junos have officially came to an end. Usually the night closes with much more excitement, but news of the volcanic cloud coming, people packed up pretty quick and trying to get out of town!

What an amazing weekend. I was able to discover some really great new music and celebrate some old favourites!