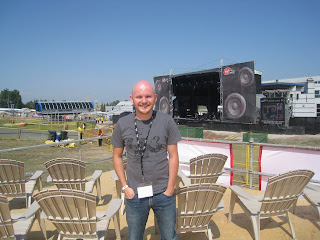 ToThis weekend Calgary is finally playing host to the much rumored VirginFest. Some of the acts this weekend include Metric, Wintersleep, K-OS Thunderheist and a little band called Pearl Jam!

I’m going to be back stage all weekend weekend long chilling with the bands and checking out the shows. My goal is come up w
ith cooler words to use than “chilling” and “checking out”. Come back all weekend long to get all the sites and the sounds!
12:23pm: The gates are about to open and this will probably the only the time there won’t be a line for beer. Hydrate, Hydrate, Hydrate!
12:32pm: There are no bad seats. The ampitheatre is great idea.
12:34pm: Lots to do besides l
isten to music. Massages, Pole Dancing, Xbox’s oh my! What kind of virgins are they looking for?
12:38pm: Bring 500 bottles to the recycle booth and get a free Virgin phone!
12:40 pm: Bacardi is going
completely green. They even have a solar-paneled Giant Lite Brit! Put your empty bottles into and it will turn in
to a giant message! 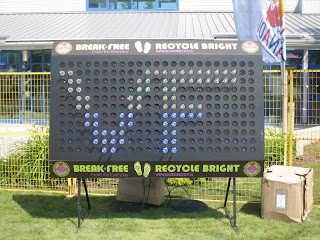 12:52pm: LOVE the Silencer Booth. I’ll be using that later!
1:21pm: Gates are open. People are streaming in already claiming their spots for Pearl Jam….in seven hours.
1:31pm : Autograph Sessions (they’ll sign ANYTHING you want!) Mother, Mother-3:10pm, ThunderHeist-4:00pm, The Cliks-6pm
1:39pm: The Great Bloomers have
taken to the stage early! Great start.
2:00pm: If there is a cooler VirginFest in Canada, I haven’t seen it. Although walking up the hill with the cast on is killer
2:15pm Another great band, Mother, Mother has taken the stage.
2:34pm: Nothing, I mean nothing makes me more nervous than slanted porta potty. 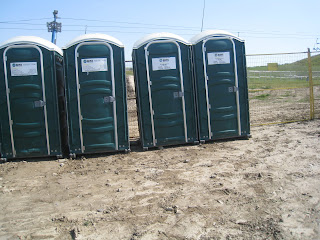 3:36 pm: Came back from some serious dancing with Thundertheist. Another great canadian band I hardly knew anything about!
3:38pm: Would the lead singer of Thunderheist be offended if I forced her to eat?
3:40pm. Combined these two people have seen Pearl Jam 35 times. 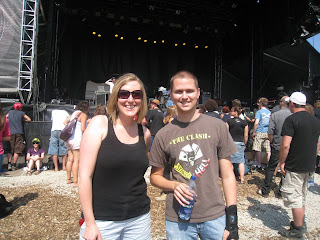 3:53pm –I just ate the GROSSEST pizza of my life. Fail Pizza 73, Fail indeed.
3:54pm I keep forgetting about the CJAY tent. Listening to Static in the Stars as I type.
4:15pm: The Arkells are now on the stage. They aren’t wowing me, but still pretty solid.
4:28pm I need a power nap.
TWO HOUR BREAK
6:15pm I just walked around the entire ground and now I am a gross, gross sweaty mess. BUT I just had a great Bacardi Breezer! Now the day is getting better…and cooler.
6:42pm The site is PACKED and more people are still coming. Lines are long and I think people are starting to get restless.
6:50pm I totally wouldn’t mind a little rain shower.
7:19pm The progression of the Bacardi Lite Brite. 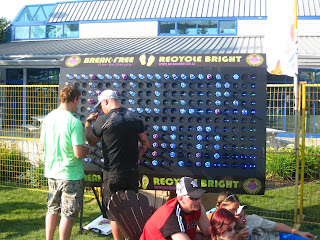 7:22pm The crowd is building and getting pumped. I’m heading to the VIP section. 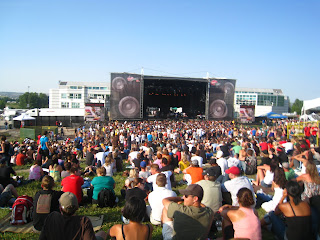 8:52pm Got a text from the Pearl Jam super fan in the front row. Too nuts for him. He moved back and gave up his spot.
9:00pm: To a dad holding up his son for two hours. Eddie Vedder: “Hey Kid, You Got A Good Dad.”
9:24pm The bathrooms are disgusting. Like Biggest Loser Contestants naked disgusting.
9:28pm Left un-attended the Bacardi Brite Lite has turned into a giant penis. 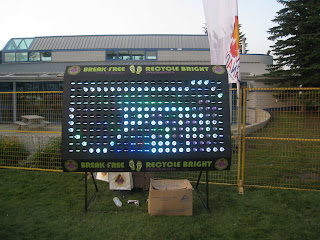 12:27pm (Sunday). The problem with Live Blogging an amazing festival is that at some point, you want to put the computer down and just enjoy yourself. So that’s what I did. Of course the drink tickets I found on the ground helped, but I was having a great time anyway.

I’m hearing a lot of positive things from the Virgin Fest grounds the morning after. People seemed to have a really great time. I did hear however the the shuttles home were a nightmare and so was walking up a hill that was used for winter olympics to get to the parking lot.

Part two
of the festival is today. I’m not expecting the same crowds as yesterday. Call me crazy but I don’t think Billy Talent and Metric have the same pull as Pearl Jam! Which I have learned you always have to type with an exclamation point.