Little Riding in the Hood!

While I was doing some boxing day shopping, I stumbled upon one of the most inappropriate toys I’ve ever seen. (And I have been to an adult toy store!) As always, my use of inappropriate varies from hilarious to down-right rude.
Take a look at what I found! 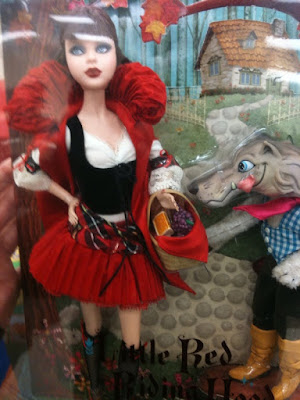 Um….wow. Really? I don’t even know where to start. This is obviously not your mother’s Barbie. And yes, this is a part of the Barbie collection. We could discuss the trampy make-up or barely-there clothing, but I choose to focus on the wolf who seems to have been strategically placed in all his lick-lipping glory. I mean how did this get by toy developers? There is no way that anyone can look at this see how ridiculous it is. This would totally be fine in another store like Urban Outfitters, but this was found in a children’s section of Winners!
This has to be a new low for the store, which is impressive for a place that has been known to sell clothes from Timmy Hilfiger and The Gop.
Needless to say, I bought two.