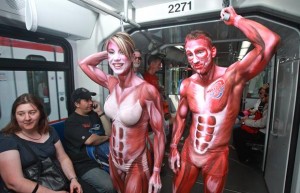 Body Worlds and The Brain is one of those exhibits that when it comes to town you can’t imagine not seeing it. Â Then the weeks pass and you keep procrastonating and before you know it, Body Worlds has packed up and might not come back to your city for another five years. Â So unless you are really ambitious or have a crazy ambitious friend that forces you to go, you might miss out on one of the coolest modern-day exhibits we might ever see.

I want to be your crazy ambitious friend that forces you to go.

I finally got the chance to see Body Worlds this weekend and it really….well….rocked my world. Â I honestly wasn’t prepared for what I was going to see. Â Like everyone, I had heard about the traveling show that features real bodies that have been preserved to show its visitors the most raw look at the human body we’ll ever see. Â It sounds gruesome and I think that has probably kept many people away, but I was so happy to see how respectful the entire display was. Â As I first time visitor, it is important to know that all the bodies died of natural causes, none of them went through autopsies and all the “participants” wanted to donate their bodies to the exhibit. 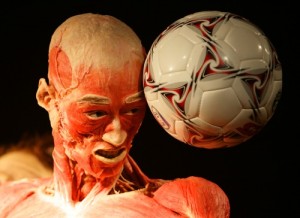 Not that any of that makes the entire tw0-hour plus experience any less shocking.

As a writer it is actually very hard for me to say what peering into life after death meant for me. Â I kept trying to picture the bodies as living people. Â What did they do? Â Where did they live? Â How did they die? Â Needless to say, it wasn’t your typical Thursday night. Â But maybe you shouldn’t look at the bodies that way. Â Maybe you should look at them the same way you would look at a dissected frog. Â But then again, maybe that is disrespectful. Â It turns out, it is all about the conversation.

And that is what I think Body Worlds is really all about. Â Thinking back, the highlight for me was the conversations we had before, during and after. Â If you are lucky enough to go with someone who knows a little bit about anatomy or science, it will be like having a personal tour guide.

Fun fact: Body Worlds says that they have an average of two people who pass out a day. Â They are usually guys between the ages of 18-23 years old.

There are currently a total of five Body Worlds exhibit around the globe and the one in Calgary will only be here until Labour Day. Â You know you want to see it, you know you have to see it. Â So don’t procrastinate. Â Just buy your tickets…on an empty stomach.