So if you are like me youâ€™ve just planned the trip of a lifetime. Youâ€™ve got your plane tickets, your Lonely Planet and youâ€™ve even got someone to take care of your plants/kids/pets. But then you find out you are just missing one thing. Your passport. Whether youâ€™ve never had one, itâ€™s expired or the darn thing has just run out of pages, Canadians all over this fair country are fighting tooth and nail to get their passports in time for their trips. And Iâ€™m no different.
The passport experience is a complicated one. You need to get a picture where you arenâ€™t smiling, you need to find references, as well as someone who can actually vouch that you are who you say you are. Donâ€™t forget, they have to have known you for at least 5 years. This becomes further complicated for the thousands of people who are knew to Calgary and are lucky to anyone let alone someone that will sign off on them having a passport. When you have finally completed application, itâ€™s time for the fun part, the actual application process.
Ever since the Canadian government implemented the new passport regulation the line ups for the office have been out of control! People have been doing whatever they can to get through the long line ups. Whether it is paying homeless people to stand in line for you, or ordering Pizza Pizza and getting them to deliver to the line itself, Calgarians have certainly been creative. But can you blame them? Whether youâ€™ve stood in line for 8 hours or mailed your passport 3 months ago, it just seems to be one thing after another. 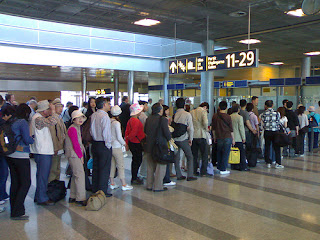 If you havenâ€™t had the opportunity to have to try to contact the passport you office consider yourself lucky. There are several different ways you could try to contact them. You could stand in the aforementioned line from hell, only to be greeted with perhaps the rudest government worker around. Seriously, itâ€™s almost entertaining how rude this one guy is (you know who you are). He asks you if you applied â€œOnline or Old Schoolâ€. Be warned that either response lands you in hot water, you might has well just walk away.
Then again there is the toll free number. That is if you can get through at all. Most of the time you get a busy signal. If you actually do get through, you are greeted with a message about how busy they are and that they have exceeded the amount of people that can put on hold. Then they hang up on you. Itâ€™s a great feeling. I have, however, found a loophole, but Iâ€™m not willing to part with said information until I have my passport in hand. But know that there is one out there.
Using the loophole I was able to talk to an agent. It was a wonderful experience. At first I was berated for waiting so long to order my passport (three months is waiting too long, I guess) and then I was told there was nothing they could do and to just cross my fingers. Stunned by my poor reception, I called back the next day. The next agent told me that it was a lost cause and that I should re-order my birth certificate and start again. Again, awesome.
However, fret not there is another way of getting ahold of the Passport Office. You can email a request and they will call you. That is if you are lucky enough to be around when they call, if not, they leave a message saying that you can call them back anytime at, wait for it, the above toll free number. How lucky and convenient indeed.
Needless to say that passport experience is a not a great one. But who is to blame? Yes we knew there was a deadline, but how were we ever to expect that it would take upwards of three months to get a passport! And doesnâ€™t Canada have a small enough population anyway? Surely not everyone is applying for passports at the same time. Half the people I know have never even left their home provinces. I mean how many passport applications can there be out there anyway?
But it will all be worth it in a few short weeks when I will be sitting on a beach in Hawaii sipping a strawberry Daquiri. Or at the very least, my friends can show me their pictures of Hawaii when they get back. Besides the warm sandy beaches, dolphins and tropical waterfalls isnâ€™t Hawaii just the same as Melrose? Yeah, thatâ€™s what I thought.
update: I was not impressed to see Claire (the cheerleader) on Heroes get a fake Canadian passport last night. I sorta felt like NBC was mocking me, more than usual.