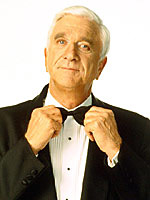 Wow.Â  This one kinda hurts.

Leslie Nielsen of Naked Gun and Airplane fame has passed away. His family has confirmed this with several major Canadian news sources.

The Regina-born actor was 84 years old when he died of pneumonia. According to Wikipedia, “Nielsen appeared in over 100 films and 1,500 television programs over the span of his career, portraying over 220 characters.”

What can you say about the comedic-genius that hasn’t already been said?Â  He always seemed so nice and genuine. He was the kinda guy that you secretly wished your were related to because you know that he would make Christmas dinners so funny.Â Â  In the past few years, he’s made some really crappy movies like Stan Helsing, Scary Movie 4 and Superhero Movie but let’s be honest, he pretty much perfected the spoof genre. In my eyes, his comedy is untouchable.

Thanks for the laughs Leslie!