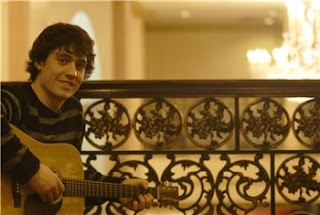 I don’t like to leave my apartment. If I do it usually means that I going to spend money, get called “moby” by a group of guys in a hummer and get sunburned. Plus, what happens if I miss a show on MTV or Much More Music, my Tivo stops working, then I get to work and they have all decided to start watching TV and it’s a show on MTV none the less, than I have nothing to talk to them about and because I have nothing to talk to them about they stop talking about television and go back to talking about knitting and their children……what happens then huh? HUH? I think I’ve proven my point.

But every now and then I will find a solid reason to leave my apartment and for the first time in three months that reason will be taking place on Wednesday night. Andy Brown is a singer/songwriter from my hometown of Fredericton (well actually Woodstock but is there really a difference?), I never got a chance to see him while I was in Fredericton but I just found out that he’ll be in Calgary this week, so I figure now is better than never right?
Andy will be playing at the The Blind Beggar Pub on Wednesday starting around 7:30pm. After checking him out on his myspace page today, I’m honestly excited for the show. Hmmm maybe he is the solution to New Brunswick’s Canadian Idol draught.
Hope to see you there Calgary readers….and hard core Edmonton fans!