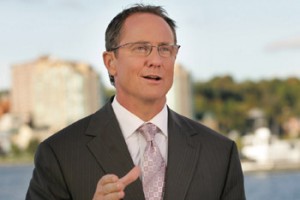 By now you’ve probably heard that Shaw has just bought Global, or was it that Global bought Shaw? Â Someone bought something. Truthfully, Â I never bother much with network financial troubles, mostly because it is only a matter of time before CTV owns everything anyway.

But while everyone else was busy crunching numbers and trading stocks, one very important piece of information may have slipped through the cracks.

This past Friday, my second favorite Canadian news anchorÂ Kevin Newman, announced that he will be stepping away from the Global News desk by August. Obviously Lloyd Robertson is number one, but Newman is easily #2. Â Kevin has always kinda felt like that uncle who was cool enough to save you from a boring family reunion and get drunk with you and your friends in a bowling alley. Â But at the same time, he could explain to the difference between Iraq and Iran. Â I have three uncles, trust me, that is no easy task.

In his career, Uncle Kev has won two Gemini Awards, two Emmy Awards and a Peabody Award. Â Plus he tells the dirtiest jokes in front of your grandmother.

It will definitely be sad to see him leave. The TV landscape is obviously changing, I just wish he was still going to be a part of it.