Kelly Oxford joins the line up for my new social...

As many of you know, there’s two things I love: Staying busy and helping people tackle social media and digital marketing.

I feel like social media and digital marketing get a bad reputation. We’re taught that only 22-year-olds know how to do it, and that the learning curve is too steep. I happen to think the exact opposite. I actually think social media and digital marketing is for everyone, as it should be, and that with the rightÂ tips, tools and education, it can change the way your business works…for the better of course.

Which brings me to SocialWest. Which is the new conference I created this year to help educate those interested in social media and digital marketing. It’s packed with experts, not professional speakers. That’s because I want you to learn from the people who are doing it. The ones who are using their social media skills to make their companies successful and putting a roof over the heads.

SocialWest takes place from June 15th to 17th and will feature 28 speakers from across North America. So far we’ve announced speakers from Facebook, Twitter, AirBnb, WestJet and more!

With just over a month to go until the biggest social media and digital marketing conference on the prairies, I’m so excited to announce our second keynote: The one and only Kelly Oxford! 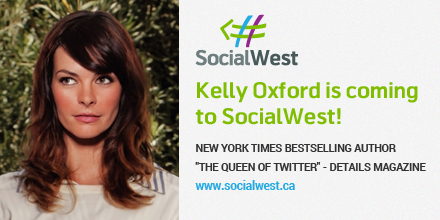 Kelly Oxford, dubbed “the Queen of Twitter” by Details, started writing at five years old when she penciled “I had a baby” into her Hello Kitty diary, and she hasn’t stopped since.

She now writes words that companies like Warner Bros., CBS, and NBC have bought for film and television and magazines like GQ have published. Earlier this year, TV Land put into development a semi-autobiographical comedy from Kelly and Jimmy Kimmel Live co-head writer Molly McNearney.

Kelly is coming to SocialWest to share her uplifting stories about following her passion from her house in Calgary to ending up a NYT bestseller and pitching jokes to James Franco on the set of his latest movie!

With the announcement of our second keynote, we’re also excited to release the SocialWest schedule. In the coming weeks, we’ll be announcing some more speakers and some other surprises, but as of today, you can start planning your schedule and plotting out your course of action to make the most of your time atSocialWest. Be sure to check out our three newly-announced networking events too! You’ll also be able to learn a little more in depth intel about our speakers.

SocialWest is going to be an amazing experience. It’s aimed at education and I assure you that you’ll walk away with a notebook (or two) filled with useful, practical information that will undoubtedly help your career and business.

Grab your ticket and get in touch if you have any questions!