Kelly Out, Reba In! 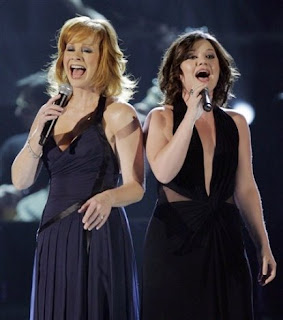 It was announced yesterday that Kelly Clarkson was postponing her Calgary Stampede show and moving it to November to coincide with her North American tour. So it looks like Calgary no longer has Kelly Clarkson bragging rights, which always I weird thing to have anyway. It’s also frustrating because I went through with a “Kelly Clarkson’s Only Canadian Tour Stop” tattoo around my navel. Crap.

Anyway, don’t be too sad stampeders because your can still use your Kelly Clarkson ticket in november and you can still use your ticket for admission into the park during the Calgary Stampede.
In turn, it was announced today that Reba McEntire would be taking over Kelly’s spot on July 9th. Which is not a bad replacement. It’s interesting because Reba’s husband is also Kelly’s manager. This is how I imagine that conversation going down:
manager: yeah, so kelly can’t come in july.
stampede: what? but stampede would suck without her!
manager: cheesy, but accurate. I’m sorry. She’ll be back in november though.
stampede: uhhh well, you’ll have to find someone to replace her.
manager: uhhh. okay. hold on (puts phone down). “Reba, honey, what are you doing July 9th”.
reba: (in background): Probably just watching Tremors again.
manager (to stampede): Reba can do it. Would you guys be okay with Reba?
stampede: Kelly Clarkson who?
Reba tickets are $59.50 to $79.50, which includes admission to the Stampede on the day of the concert. Tickets will go on sale on May 15th, but I’ll obviously have the presale for ya!