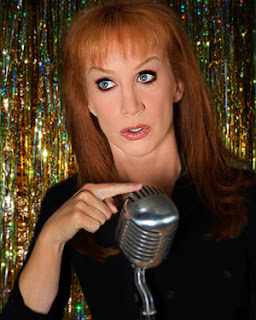 Okay, I’m going to weigh in on the Chris Brown/Rihanna thing again for just one split second.Â

Kathy Griffin just gave an amazing interview where she talked all about the future Ike and Tina Turner. Â One of my favorite quotes was:
“When Diddy says things like ‘Well, a man should never put his hands on a woman, but a woman should never put her hands on a man,’ don’t act like it’s a fair fucking fight, Diddy. I really resent when anyone implies that she started it. It’s not a cage match. She’s a girl. Let’s be honest. She can’t physically hurt him – unless she hit him with a knife or a gun, not her fist or her hand or she slapped him – let’s cut the shit.”
God, it’s about time someone said it.
Head on over to Out is Through for more of the interview. Â
Why doesn’t Kathy have her own show yet?