Going to a Calgary Flames game in an executive box owned by the same people who own the stadium in which you are watching the game is alot like using a urinal. At a urinal you end up standing beside a stranger doing your busines, you stand there wondering, should I say something? What would I talk about? Maybe I shouldn’t say anything. But then we are standing right beside eachother.

There in a paragraph is how I felt last night watching the Flames melt the Avalanche 5-2! Being there, in the box, was amazing. You could feel the chill from the ice, you could see the hockey players faces and best of all I could sense the jealously of thousands of people wonder who the bald kid was in the Pengrowth Box.

Chatting with CEO’s and Presidents I couldn’t help but chuckle to myself. How do I find myself in these situations! (me at Celebrity Duets, me at Rock Star: Supernova)
Regardless, I think I handled myself well, I kept the discussion topics away from me as much as possible. I figured they weren’t interested in hearing my theories on the Veronica Mars rapist. You’ll also be happy to know that I also resisted any urge to make jokes about “boxes”, although it wasn’t easy!

In a week where one of my friends starting working at the UN, another won the Rhodes Scholarship and all others have been finding varying degree of success. I find a little happiness now that I can say that I shook hands and drank Crown Royal with the best of them. 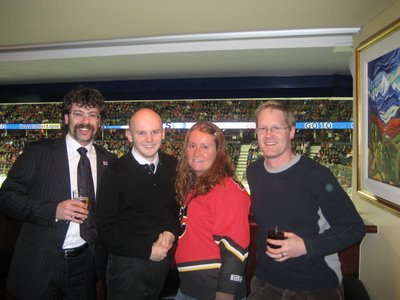 My friends: Chad, Me (I count), Jen and Brian

(we missed a goal right behind us when we took this pic!) 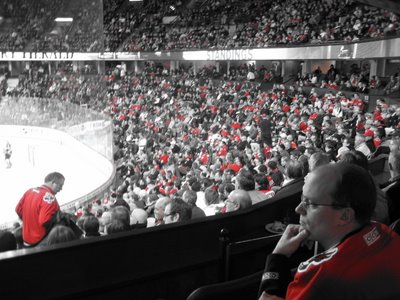 A cool pic I took from the box (hee hee). I heart my new camera!