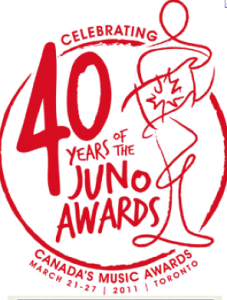 So what are the Junos exactly?Â  Let’s get you caught up.Â  The awards celebrate the best in Canadian music.Â  Simply put they are the Canadian Grammys. The Juno Awards are actually spread out over two nights.Â  Tonight will see the majority of the awards given out, thirty three in fact.Â  Tomorrow’s actual broadcast on CTV will feature only eight awards and whole lot of performances.

As a lover of all things Canadian music and entertainment, this my friends is my bread and butter. 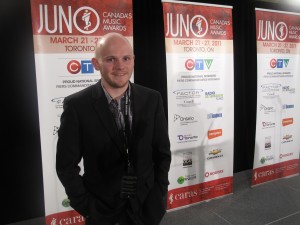 So where am I?Â  Toronto.Â  More specifically, The Allstream Centre for the Juno Gala.Â  I’ll be chilling out backstage all night, chatting with all the winners (and some losers,) so if at any point you have any questions, just let me know.Â  This night is always a blast.

I’m going to be live-blogging all night, so stay tuned!

6:15pm Tonight’s Gala kicks off with a super buzz-worthy Shad, he’s nominated for Rap Recording of the Year.Â  He also write a really interesting blog post this week in the National Post.Â  Could big changes be ahead for the Junos? Click here to read it.

6:19pm:Â  Jian Ghomeshi and Seamus O’Regan are tonight’s co-hosts.Â  I remember from last year that Shamus stole the show with his very surprising potty mouth.

6:40pm: Breaking news.Â  Welcome speeches are always boring.Â  No matter where you sit or how much free wine you’ve had.

6:47pm Adult Alternative Album of The Year goes to Neil Young...who is looking anything but.Â  It’s been 29 years since he was last at the Juno Awards! 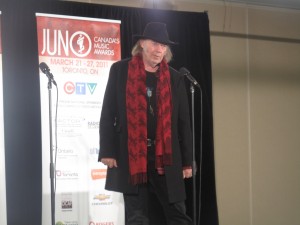 6:56pm: I asked Neil Young, if he followed the Top 40 genre that he will be winning awards with this weekend.Â  He said, “Music is music. I don’t follow handles. That’s someone else’s job.”

6:59pm: “How do we win an Instrumental Juno?Â  Add vocals.”Â  –Fond of Tigers after winning Instrumental Album of the Year. 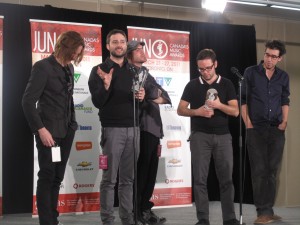 7:02pm: Polaris Prize winners Karkwa win Francophone Album of The Year.Â  “It means a lot that we can make an impact on the Canadian music industry.” 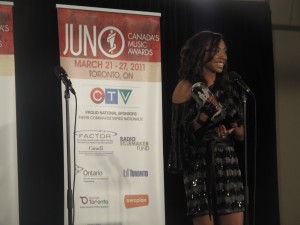 7:09pm Edmonton’s Quanteisha wins R&B Soul Recording of The Year! Who knew Edmonton was so urban?Â  Turns out she doesn’t even have an album out yet, seven singles and she’s still independent.Â  Amazing example of how cool the Canadian music industry can be.

7:12pm Jim Byrnes wins Blues Album of The Year.Â  He’s a successful actor (Hellcats, Sanctuary), lost both of his legs in a car accident and is the nicest person we’ve had back here all night.Â  I’m amazed by his perseverance.

7:23pm: Elain Lil’Bit Shepherd wins Reggae Recording of The Year. I’m always surprised by how little attention this genre gets. “The reggae genre is actually lot stronger than we give it credit for.”

7:30pm Gryphon Trio, Lara St. John, Gerald Finley and R. Murray Schafer all win Junos for their classical albums, which has never come across my radar.Â  Tell me, am I missing out?

7:34pm:Â  Matt Good wins Rock Album of The Year. He’s not here because he’s previously called the Junos pointless. He should have at least come for the free food.

7:53pm: Deane Cameron wins the Walt Grealis Special Achievement Award in the same building that his father enlisted in for the Canadian military when Deane was 17 years old. 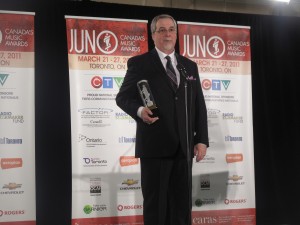 8:10pm Cameron has been talking for quite a while now and I kinda thinking how great it would for everyone to get the chance to summarize their life and thank all those that have meant something to them.Â  That alone is an honour.

8:14pm “If I didn’t tell anyone that I won, I doubt anyone would know about this award.Â  I hope that more people would pay attention to Jazz music.” -Traditional Jazz Album of The Year winner John Macleod.

8:19pm: Show opener Shad shocks the crowd and wins Rap Recording of The Year.Â  Then why wasn’t he nominated for artist of the year! 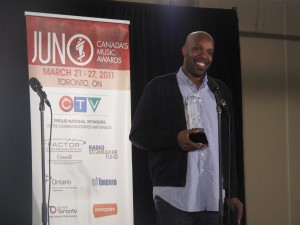 8:36pm: Shad is backstage now and the media room is so happy that he got Best Rap AlbumÂ  over Drake.Â  No offense to Drake, just refreshing I guess.Â  “Yeah absolutely”, when asked about hosting next year’s Junos.

8:42pm:Â  Daniel Lanois wins Producer of The Year and then apologizes for beating Arcade Fire.Â  I’m sure they’ll be fine. He then invites Neil Young up again, “just to say something.”Â  Why not? 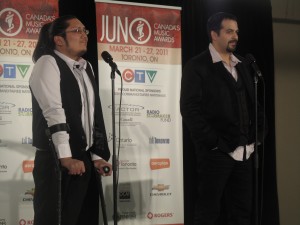 8:55pm “We try not to put in a bunch heyaheys, to make sure we didn’t do the overkill.” -Aboriginal album of the year award winner, CerAmony. 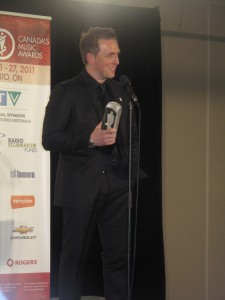 9:01pm I asked Johnny Reid if he felt that his positive attitude was exceptional in the music industry, “I learned a long time ago that life is too short. It’s as simple as that.”

9:09pm: Ladies and Gentlemen, the least likely winner of Best Children Album ever: 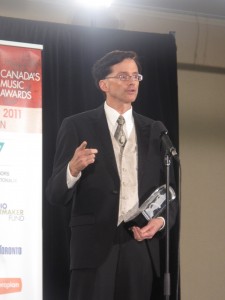 9:19pm: Rush wins for Music DVD of The Year.Â  I was super excited until I realized that none of the people who won who are actually in Rush.Â  I’m glad that I asked my neighbour before asking a question. 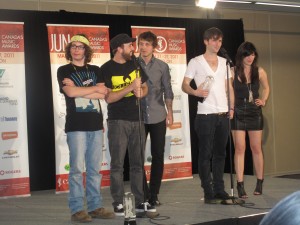 8:26pm: Huzzah! Said the Whale wins New Group of The Year!Â  J’aime them beaucoups!Â  Plus their energy is infectious!Â  They actually had their stuff stolen a few days ago and hilariously re-enacted their mishap. Click here to watch.

Wow a great night!Â  Thanks for following along!Â  The big show is tomorrow night!Â  See you then!