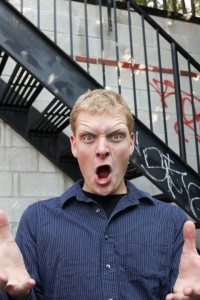 John Hastings has a LOT to laugh about! Â On Friday night, the comedian won the Just for Laughs Festival New Canadian Comics National Showcase in Montreal!

The rising comedian has been doing comedy for about fives year now and is even nominated for Best New Comedian at this year’s Canadian Comedy Awards!

What makes this story even cooler is that John is my cousin! Â And it has been an absolute blast watching him succeed in something that I’ve always considered to be the most difficult things to do in entertainment!

Congrats John, you win this year!