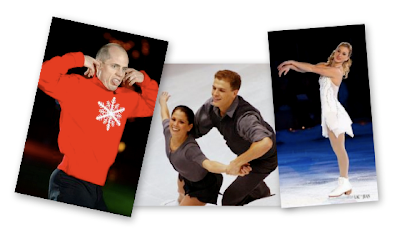 Are you going through Olympic Figure Skating withdrawal? Are you suffering from not enough sequins in your life? Fret not, ABC has a cure for your shakes and the cold sweats.

The network just announced that they’ll be airing a new figure skating competition tv-series in just a couple of weeks.
Thin Ice will match-up 1o professional figure skaters (from the four different types of figure skating) into five first-time couples. The couples will then perform routines and hope for the audiences votes. In case you forgot how democracy works, the couple with the most votes wins!
The show is going to be hosted by Elisabeth Hasselbeck (ugh) and Kurt Browning (yah!).
On top of Browning, the show is going to have a huge Canadian contingent. Other Canadian skaters included are: David Pelletier, Patrice Lauzon, Jamie Sale, Shae-Lynn Bourne and Marie France Dubreuil.
(It is okay if you giggled when you read “on top of Browning”.)
Um…did someone forget to invite Elvis Stojko?
If all those skaters weren’t enough, Canada’s newest sweetheart Joannie Rochette will be doing a special performance for the show!
The special will air on March 19 and March 21st. No word yet on what Canadian network will be airing the show.