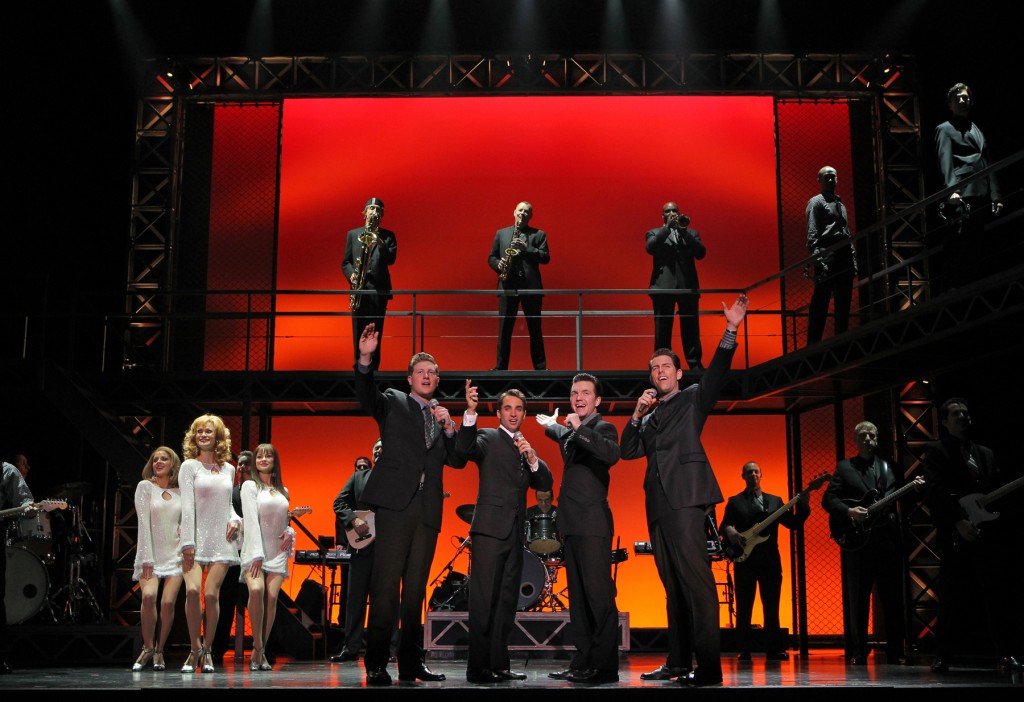 Truth be told, Calgary has a long history of being the worst audiences at a concert ever.Â  I don’t know how many times Iâ€™ve been told to stop dancing at a pop concert or shrunk back in my seat, weighed down by the awkwardness of a high-energy performance, stifled by a seemingly bored crowd.Â  Remember the time Tony and Grammy winner Glen Hansard had a few choice words to say about Calgary crowds? It’s nice to know that it’s not just something that I’ve noticed.

But today, Iâ€™m happy to report, the curse seems to be broken. By four guys from Jersey, no less.

The musical Jersey Boys opened in Calgary last night and while I’m still tapping my toes, I’m also still in awe of the crowd.Â  In the seven years Iâ€™ve lived in this city, Iâ€™ve never seen a crowd so excited, I think Iâ€™m even more surprised that it was the musical story of the Four Seasons that was able to do it.

The success of Jersey Boys is no fluke.Â  Four Tonys, thousands of performances all around the world and itâ€™s currently being developed into a feature film. But this was the first time the show had come to Calgary and if you didnâ€™t know better, you would have thought that the crowd thought they were actually at a real Frankie Valli concert.Â  There was hooping and hollering, standing ovations for individual performances, and dancing, lots of dancing, it was perfect for the musical that is really more of a concert anyway, a really, really fun concert.Â  (As an aside, I’d like to hug the four women in the front row who bopped along to the entire show. You ladies looked like a blast, let’s party at Cowboys.)

This production of the show stars Joseph Leo Bwarie as Valli, itâ€™s a sensational tour de force performance that was worthy of the numerous ovations he received. The highs and lows of one historyâ€™s most successful bands was perfectly portrayed, bringing us along on a journey that just happened to be full of songs that everyone already happened to know the lyrics to anyway.

And I think thatâ€™s most of the fun of Jersey Boys, even if you happened to be bored by a scene (which are changed a dazzling and fascinating speed), you wonâ€™t be bored for long, because within seconds youâ€™re singing songs that you didnâ€™t even know you knew.

If you were to explain to someone the story of the real Four Seasons, youâ€™d probably be talking for a while, but what the show does in just under three hours is it brings you into a world that created so many of the songs that are still popular today. Â The show is just as exciting for me, as Iâ€™m sure it was for the hundreds of girls that were screaming with the Four Seasons when they first played American Bandstand.

Dancap Productionâ€™s of Jersey Boys is playing along the same timeline as this yearâ€™s Stampede, but this show is well worth putting away your cowboy hat for a night and remember why music was so good in the first place.

Bonus:Â  This year Calgary is Canada’s Cultural Capital and as special treat, last night’s audience was treated to a special Jersey Boys-version of The Stampeder’s Sweet City Woman, which was chosen as the theme for 2012.

Check out the video…and then try to get the song out of your head.