For weeks I have been losing over the sleep over the fact that the Veronica Mars movie hadn’t released any Canadian dates. Director/creator promised via emails that there was news coming, but could I trust him? I mean, who can you ever really trust! But the news came out today, exactly one month until the movie premieres in North America and the news is good!

The Kickstarter-funded movie of the cult tv show will indeed open in Canada on March 14th and open pretty wide! It’ll start playing at Cineplex theatres in 13 cities:

and then the next Friday, March 20th, eight more cities will be included:

This is really good news, because it means the movie must be tracking really well and Cineplex must expect that’ll it fill seats, which I definitely think it will!

If the movie isn’t playing in your town, don’t worry. Veronica Mars will be available on iTunes on March 14th for download as well. Â That’s right, it’s one of those rare movies that will be released digitally and in theatres on the same day! Â Does that mean I’ll see it in theatres and download it on the same day? Â Yup!

In the announcement today, there was also a little tease for Canadian fans. Thomas won’t say why, but he included this photo of what looks like some very sweaty national anthem singers wearing Canada jersey. 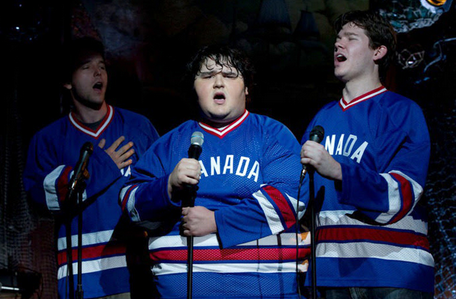 Bah! I don’t think I’ve ever written a blog post so quickly in my life! VERONICA MARS IS COMING TO CANADA!