IT'S BACK: THE MOLE 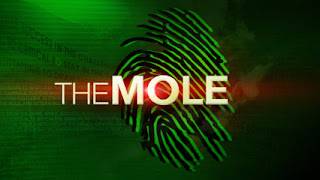 June 2nd will now be forever known as my second Christmas for one and only reason: The Mole is finally back on television!!!!!

It’s been 6 years since The Mole was on the airwaves. Â It doesn’t seem that long because there were actually two celebrity versions of the show after that, but I’m ignoring them because they essentially ruined what I have always maintained was the best, intriguing and most exciting reality show.
I remember when the show premiered people complained that it was too complicated and not easy to follow. Â Well thanks to those people we have been inflicted with shows like The Singing Bee, The Moment of Truth, Big Brother and For Love or Money. Â Thanks a lot.
So finally The Mole is making it’s triumphant return and I couldn’t be more excited. Â But I want you to be just as excited so I’m going to break it down for you as easy as possible. Â Ladies and Gentlemen may I present the Mole in point form.
-There are 12 players
-One of them is “The Mole”
-The 11 other players must figure out who the mole is.
-Each episode there are competitions to increase the money that goes in the pot that the eventual winner will win.
-The Mole must sabotage the games to keep them from winning the money
-At the end of each episode the players must complete a test about “Who is The Mole?” Â
-The player with the most mistakes is “executed” (cue: Red Thumb Print)
-Everyone tries to pretend to be the Mole to throw everyone else of. Â Thus causing confusion when they try to guess who the mole is.
-Anderson Cooper did host. Â Now it’s Jon Kelly (Extra)
-No one, not even the host, finds out who the Mole is until the final episode.
-In the end we get to see all the cool ways The Mole sabotaged the game.
-The producers always sneak in little clues. Â They seem obvious in retrospect but you’ll never figure them out when you first see them.
In case that wasn’t clear, check out the clip that should help explain it all!
It’s the summer time and the Mole is back!!!Â
Life=Good