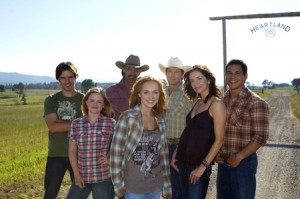 It’s a good day to be working in the Alberta television industries.Â  Two huge announcement over the past few days meanÂ  that lots of people will be able to find work in the struggling industry well into 2011.

First up is the obvious, CBC just announced that the horse hit Heartland has been renewed for a fifth season.Â  This is pretty much a no brainer consider the shows’ stellar ratings. The Heartland Christmas Â movie that aired last week attracted 1.4 million viewers, which is about the same amount of viewers it pulls in every week. Can you think of another CBC show that has lasted so long? 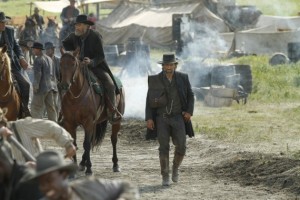 Secondly is something that is a little more interesting.Â  I don’t know if I’ve told you about my obsession with AMC’s The Walking Dead.Â  I’ve literally had the shakes since it’s all to short six episode season ended a few weeks ago.Â  Whether this is shocking or not, The Walking Dead was my first introduction to the AMC network. Yes, that means I’ve never seen Mad Men.Â  You can take a moment to process that.Â  But now comes another reason why I might have to keep AMC on my regular rotation. They just announced that they are developing Hell on Wheels, a western set in post-Civil War America, that has been picked up for a full season and is filmed in and around Calgary!Â  The show starsÂ  Anson Mount (In Her Shoes),Â  Colm Meaney, Dominique McElligott (The Philanthropist) and rapper/actor Common.

Okay, so a western set in post-Civil War America isn’t really my cup of tea but maybe The Walking Dead zombies can make a cameo.Â  Maybe.