Big Brother Canada Runner-Up: “It was an honest mistake.”

Canada won’t be forgetting about Gary Levy anytime soon. The energetic Torontonian made his presence felt throughout the entire first season of Big Brother Canada. From his copious amounts of glitter, to his eviction, Canada voting him back in the house and then his controversial loss to Jillian MacLaughlinn in the finals. I have a feeling this is just the beginning of Gary’s reign over Canada.

Here’s are interview following the finale of Big Brother Canada.

How have the last few hours been for you?
It’s been crazy media, haywire, nuts. I still haven’t eaten, I still feel like I’m on slop.

When you heard that Topaz voted for Jillian, what was your first thought?
Honestly, I was like, “Okay girlfriend, I get it.Â  You wanted Jillian to win because of her very strong game.” But then I was like, “Wait, Topaz loves me, why would she do this to me?” So I was confused, I didn’t really know what was going on.

What could you see or hear in the studio?
I saw it all!Â  I really did. I saw Topaz going crazy, I was scared. I was scared for her cause I didn’t want her to get trouble because she looked like she was going to floor Arissa. People make mistakes, people don’t understand. You have to cut Topaz a lot of slack. There’s a live studio audience, there’s lights, people are being rushed. When we talked she told me that she was focusing on “giving it” to Jillian with the 150% and I think she just got lost in it all. It was an honest mistake. I love Topaz to death. We live in the same city, we’re going to party and forget this whole thing ever happened. 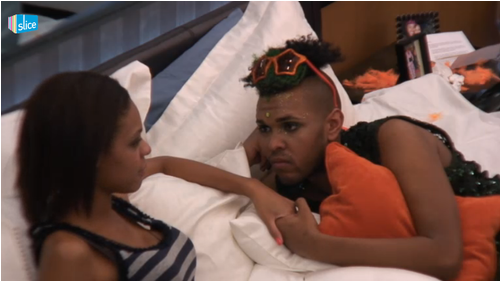 What was the first thing that Topaz said to you when you saw her?
She apologized and said that she didn’t mean for it to happen. I told her that I knew it was a mistake and told her, for me, just to let it go because I’m fine. One thing that I have to say, it was never for the money. Never ever, ever did I come to win the money. I came to make it to the end and if I won the money, that’s great, but I wanted to be a face for all those boys and girls and girly boys in Canada who’ve never seen someone like me on the television before. Just to give them confidence in being themselves and having fun. I wanted to be on camera as long as possible to send that message across Canada.

So, did you have fun?
This whole experience was the best experience I’ve ever had in my whole entire life.Â  I had a blast. This show changed my life. I thank Big Brother every day. It’s a memory I’ll have until the day I die.

Who do you think you’ll stay in touch with?
Honestly, I think I’ll stay in contact with most of the houseguests. Obviously Topaz more than others because she lives in my city, but I built a strong friendship with Danielle. Danielle is my girl, we are really tight. I love them all in their own way.

Danielle lives in my city, so you’ll have to come out to Calgary.
Of course, let’s do Pride!

And we’ll get you in a white cowboy hat!
Yay!Â  Wait…no. We don’t do cowboy hats, we do glitter.

But a white cowboy hat is the highest honour in Calgary.
Okay, then I want a really, really big one and I want it to be glitterized. 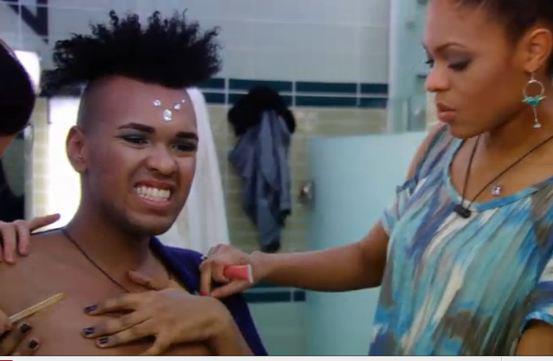 If there is another season of Big Brother, what do you think people should be doing to secure a spot in the house next year? What did you do to get on Big Brother?

I want to the in-person auditions. But I suggest that people should be themselves, no matter how you audition. Because you can tell when someone’s faking it, but you can feel it when it’s sincere.

Last question, have you gotten your cell phone back yet?
Noooooooo! I want my cellphone so bad, but I can’t get it until the end of the day. But I can’t wait to get on my cellphone and tweet to every single one of you guys in Canada. I can’t wait to talk to everyone on Twitter. (Gary’s Twitter account is @garylevyonline.)