Is Fredericton the Smartest? 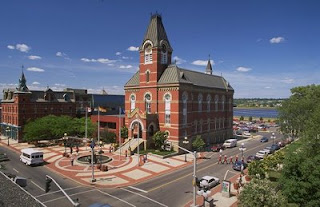 I always knew there was something special about me….errrr I mean the place I grew up.

My hometown of Fredericton, NB (whaddup freddy beach) has been nominated for the Top Intelligent Community of 2009!!!
I have no idea what that means but I think it has something to do with IT stuff. Â Admittedly, Fredericton is pretty forward thinking when it comes to wi-fi. Â Did you know the entire downtown area of New Brunswick’s capital city has free wireless! Â That is pretty freaking cool!
Fredericton is competing again six other cities across the world including Bristol (virginia), Eindhoven (netherlands) and Stockholm (Sweden).
Voting is open to the public and the polls close on May 15th!Â
Vote now and vote often!
Way to go Fredericton! Â