Is Calgary really a Cowtown? 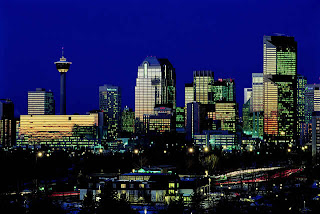 A couple weeks ago a friend from Toronto came to Calgary for a visit. I showed her all of my favorite Calgary attractions and some of its coolest neighborhoods. On the way to the airport we got to talking about Calgary. She said that although she liked it she was also a little disappointed. She explained, â€œEveryone calls it Cowtown, I guess I just expected more cowsâ€¦or at least more of the cowboy lifestyle.â€

Ever since then I have been thinking about what she said. With the Calgary Stampede only hours away, I have to ask: â€œHow Cowboy is Calgary?â€ 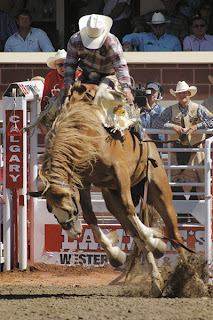 Itâ€™s easy to say that Calgary is a western city because we have stores that sell cowboy hats and boots. We even have a racetrack for horse races, which is closing. Oh and by the way, so does every city in the Maritimes.

Besides that, as I sit here on my balcony over looking a city with growing number of Skyscrapers, what else makes Calgary a â€œcowtownâ€?

I have to be honest, just because we wear funny hats and yell yee-haw and woo-hoo for 10 days doesnâ€™t make us a true cowtown. Hell go to Saint Johns Newfoundland and theyâ€™ll do it too. The only difference is Newfies do it everyday and we can only muster up ten.

So come on Calgary, if we are going to say we are Canadaâ€™s Cowtown lets prove it. Wouldnâ€™t be cool if every business had real swinging saloon doors? How much more interesting would the C-Train ride be if we were all wearing real spurs? And the Calgary Flames? What about the Calgary Mad-Cows? Because I donâ€™t know about you, but Iâ€™m way more scared of my brain melting than a little fire.

So dust off the leather chaps, saddle up the horse and look out Mission, because itâ€™s about time we make this a real Cowtown! Now, where did I put my pink Holt Renfrew bag?