Interview: The Guy At Home In His Underwear!

Starting today Mark from Toronto is doing something that not very many people could do.Â  For the next 25 days, he will be living in nothing buy his underwear!Â  Even crazier, he’ll be living entirely in his house and will be steaming the entire experience online.

I know what you are thinking: Why is Mike talking about some guy from XTube?Â  But don’t worry, this guy is totally legit.Â  The TorontonianÂ  is a cancer-survivor himself and for the next month will be known as “The Guy at Home in His Underwear” in an effort to raise $25,000 for testicular cancer.

Mark’s goal is that 25,000 people will “like” his Facebook page.Â  If he reaches the magic number,Â  Stanfield’s will donate the money to this super important cause.Â  Yup, that’s right. All you have to do to make a big difference is click a tiny little “like” button.Â  Why don’t you do it right now? 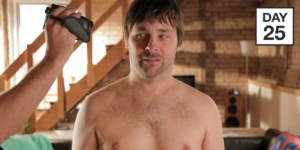 On one of his last days wearing clothes, I got the chance to ask Mark about his incredible challenge, what he did to get ready and why this cause is so important.

Where did such a unique idea about raising awareness for testicular cancer
[come from]?
Well being a survivor, testicular cancer is something that is personal to me and being an underwear company, testicles are very close to Stanfieldâ€™s â€“ both literally and figuratively. Stanfieldâ€™s recognizes that itâ€™s a tough topic for young guys to talk about so they decided to raise awareness in a way that would resonate with that audience.

Although every guy wishes he could hang out all day in his underwear, in reality, itâ€™s going to be challenging. But if it means more guys are aware of testicular cancer – I am up for the challenge!

What sort of training did you do prepare for the entire world seeing you in
your underwear?
Oh, you know, lots of practice doing the things Iâ€™ll be doing over the next month in my underwear: playing video games, cooking, playing guitar, just hanging around. Itâ€™s really about all-around conditioning.

What part of this experiment excites you the most (hopefully not visually!)?
Ha! Yes. That could be awkward. You know what, this whole initiative is really exciting and, not going to lie, a little terrifying too! Overall, Iâ€™m excited that Stanfieldâ€™s gave me this opportunity, I am excited to meet the challenge of lasting 25 days at home in my underwear, live on camera. I am excited to make 25,000 new Facebook friends. But most of all, I am excited to raise awareness and funds for testicular cancer. As a survivor, I think I have a pretty unique perspective â€“ I know how easy it can be to miss but Iâ€™m walking proof of why you need to pay attention to your own body.

On top of this project, what more can be done to raise awareness about testicular cancer?
I think guys just need to talk to each other and to build a self-exam into their daily routine. That myth that cancer only affects older people needs to get broken down â€“ guys as young as 15 are affected by testicular cancer. Itâ€™s actually the #1 form of cancer found among young men.

Can you tell us a little bit about your diagnosis and thankfully, your recovery?
I was actually lucky because my cancer was detected early. I work with the medical students at the University of Toronto. They perform various check ups and tests on me to help them practice. So there I was, having a â€œmockâ€ testicular cancer check up and they found a lump. The supervising doctor recommended I get it checked out. It turns out it was cancer and three weeks later I had surgery and was cancer free. I have been clear ever since but I still get examined every four to six months. I was so lucky to catch it early and really canâ€™t stress enough how important it is for guys to check themselves.

How do you decide what to wear on day 26?
Go commando maybe? Truthfully, it will probably feel weird to put clothes on again and a little restrictive after hanging out in nothing but my Stanfieldâ€™s. I am a jeans and t-shirt kind of guy so will probably go back to the old rotation.

guy at home in his underwear