While I proudly write about Canadian entertainment each and every day, I do have some weaknesses of the American persuasion and one of those weaknesses has always been Survivor. Which, although it is an American show, has always and continues to pull in huge numbers here in Canada, even as the show enters its 25th season.

Since it debuted, Iâ€™ve never missed an episode and yes, I still yearn for a Canadian edition of the show. Since that hasnâ€™t happened yet, Iâ€™ll happily watch the American edition, which premiered last Wednesday on Global and CBS.

Which brings me to my next, very exciting point! Over the next few months, Iâ€™ll be interviewing each and every castaway from Survivor: Philippines. One by one, just after Jeff Probst snuffs out their flame at tribal counsel, Iâ€™ll be chatting with booted castaway.

For a fan of the show, itâ€™s dream come true. So Iâ€™ll hope youâ€™ll check back every week, this is going to be a blast! 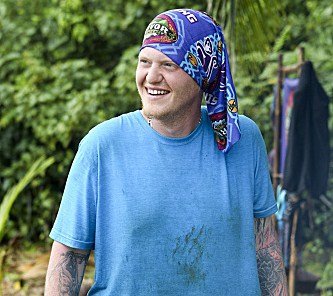 In the showâ€™s season premiere, which saw the return of three returning players from previous seasons, instant fan favourite Zane Knight perhaps tried too hard to create too many alliances and when his tribe became the first to go to Tribal Counsel, he proved no match against the strength of returning player Russell and he was soundly voted out.

Zane! First things first, WHAT HAPPENED?!
I think everyone is still trying to figure that out man! Sometimes you get a chance and I took that chance. You get one time in this game to make a move and not be part of the norm.

Do you think you made your move too early?
I didnâ€™t have a choice. I had to make my move when I took it. I think it was a little premature. 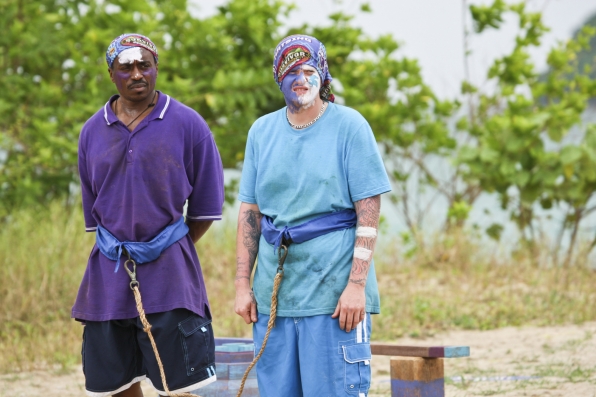 Physically, should you have been in better in shape for the grueling show??
If anything, I think I proved that this game was 9/10ths of a social game. If I had a chance to see more challenges, but the challenge I had, even doing all that extensive running, once I had a chance to get my breath back, I was fine.

Whatâ€™s it being on Survivor? Does it feel surreal?
I wish I could put into words the way it feels to walk up those steps into Tribal Council, feeling the fire beside you. And you pop up over that little hill and thereâ€™s Jeff standing there! Even writing the name of the paper with the pen and sticking into the urn, itâ€™s such a “behind the scene” type feel. I guess Iâ€™m still bigger of a fan than a player. Itâ€™s such an amazing feeling to put your buff on, I got my buff on right now, man! Itâ€™s something Iâ€™ll never let go.

Was it your first time trying to get on the show?
Actually it was my very first time and I think maybe, the process is what made me feel so big-headed, you know what I mean? I looked on the internet, like anyone else, and youâ€™ve got people whoâ€™ve been trying to be on the show for ten years, you got people whoâ€™ve been sending in audition tapes all the time. I sent in a 28 second video and the next day I was on a plane! 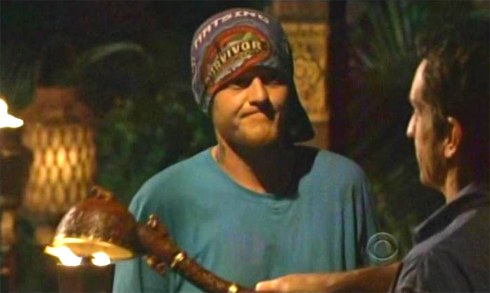 How much do you blame Russell for your eviction?
I donâ€™t blame Russell at all, believe it or not, the one that put a nail in my foot was Malcolm. If I had done more work with Malcomâ€¦. Russell gave me all the ammunition I needed, when he told everyone at the challenge what they were going to do, they were over Russell. It was Malcolm coming back and telling Denise that I had already started an alliance. He did enough ground work, to get me out of the loop.

Were there any surprises for you once you watched the show?
Seeing it on TV erases your mind completely. When you sit down and youâ€™re watching the show with everyone else, the whole show is surprising from beginning to end because you donâ€™t know how anything is laid out.

Iâ€™ve always thought they should do a season with people whoâ€™ve been evicted first. Would you come back?
You can put me on a plane right now! Iâ€™m going to tell it just like it is, if you can take anything bad from this situation, you didnâ€™t play it right. If anyone would ever tell you, â€œNo, I wouldnâ€™t go back,” theyâ€™re crazy.

Last question, did you start smoking again?
I fired one up as I soon as I got evicted, brother! All I can say is that if I did ever get a chance again, the day Iâ€™d probably throw it down.