Interview: Sook-Yin Lee takes on the story of an epic...

This Sunday, when Canadians sit down to watch the CBC bio-pick Jack, they’ll see an entirely new side of Sook-Yin Lee, who plays Olivia Chow. That’s quite a feat for someone who’s spent most of her life being a part of the Canadian entertainment world. Whether it was when she was MuchMusic VJ, her current role as host of Definitely Not the Opera, or in fascinating roles in movies like Shortbus and Toronto Stories. Â  But in her new role, we’ll see Lee is a completely new light and as she tells me in our new interview, that took a lot of work.

Youâ€™re a notable media personality in this country, did you have a relationship with Jack Layton or Olivia Chow before this movie?
I knew them both from various functions around town. I did an event with Olivia Chow, sheâ€™s also the MP of my riding, so I knew them on a public level.

A few years ago I was making a movie and I wanted to shoot a scene in the ROM and I saw Jack Layton riding his bike down the street and I stopped him, introduced myself and told him that I was having difficulty shooting in the ROM because of cost. He directed me to Olivia, because she was my MP and she put in a good word for me and eventually was able to shoot in the ROM. So I was very thankful for that mobilization. I didnâ€™t know them personally, so when I got the role, it was matter of meeting Olivia. I met her for one day and took in what I could. I fielded her with hundreds of questions and then hundreds more via email. And then went through the process of finding friends she went to school with and her best friend that she went to U of T with, just piecing together the enigma of Olivia. 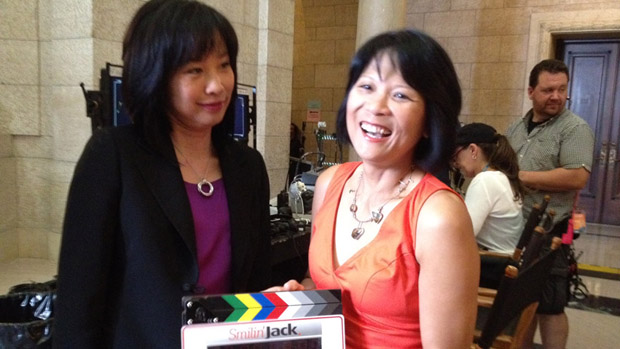 And how did the role come about?
I had read in the paper that there were rumblings of a movie about Jack and Olivia and I thought that it was a potentially compelling story to tell. As an actor, I thought that this would be a challenging and interesting role and I donâ€™t often go for auditions, but it was one movie that I had bookmarked, because it was interesting to me. So I went for a series of auditions and eventually got the role.

What did you find particularly challenging about playing Olivia Chow?
The story is a very deep one of great love, great loss, heartbreak and joy. These are very large emotions and the two of them got along so well. So it just made his passing all the more painful. As an actor, I guess in my process, I do borrow aspects of method work (becoming the character), because of the heartbreaking nature of the story, it was difficult. I think it was tremendously challenging to get to that place. But I was able to somehow open that vortex and fall into that character.

Was it surreal to be recreating Jack and Olivia scenes that Canadians are all familiar with?
Yeah, it was very interesting. The movie is an interpretation. The Olivia you see in the movie is sort of based on reality, mythology, imagination, myself and something other. But there was particular scene, that because we have access to YouTube and can watch the press conference that he announces that he was stepping down, to me, was a very compelling piece of visual. You can really read between the lines. I watched that scene so many times. That was the one scene that I did feel that reality was the best way to play that. I really did want to get every move of hers right. Watching the scene, you see him suffering from cancer most obviously, but heâ€™s just got his chin up. And he is being stoic and they come out and they are just being as positive as they can be, but Iâ€™m sure it was very difficult. Just seeing Olivia walk in, move her glass, makes sure her chair is right. I interpreted it as really trying to have a moment of control of the situation, even if itâ€™s a small gesture of making sure the glass is in the right place. Itâ€™s unbelievable to me to imagine how difficult that moment was. 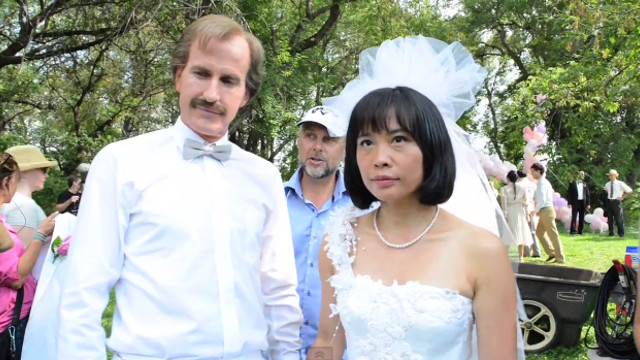 I talked to Rick Roberts, who plays Jack Layton in the movie, about this,Â  were you nervous about coming off as a caricature?
No, there was only two scenes that I did look at the body language. When I first met Olivia, sheâ€™s a woman of few words and very big action. So even to my questions, the answers were very short. So it required me to really imagine the person and speaking with her friends, allowed me to understand the emotional life of a woman that we usually see in a pragmatic and put together way. I needed to reveal her inner emotional life and thatâ€™s not something she does readily, she doesnâ€™t wear her heart on her sleeve. But I do know who she is behind that public persona and I wanted to show that. What you see is her heart.

Â It sounds like you invested so much into this role, what did you take out of it?
Well, I wasnâ€™t sure if Iâ€™d be able to do it. Because Olivia and I are so incredibly different. I dress different, I sound different, I speak very differently than her. She has a very different vibe and I wasnâ€™t sure if I could do it. But I sort of submerged myself into the role and worked with a very talented cast and crew, all with the same aim in mind, Iâ€™m happy to have gotten out the other side and landed on my mark.

I certainly donâ€™t feel like Olivia Chowâ€™s story is done and who knows what the future holds for her, could you see yourself playing her again?
(Laughs) I donâ€™t know! It really depends on the drama that happens in her life. What made me want to tell the story was that I saw an inherent human drama that was so compelling and had such high stakes and to me, it was a universal story of love, loss and continuation. Thatâ€™s what drew me to the project. Depending on the events that transpire in her future, if itâ€™s something that I feel is a very potent possibility for good storytelling, certainly Iâ€™d be open to it. But weâ€™ll have to see what happens!