3000th post! An interview with Ron James and his World... 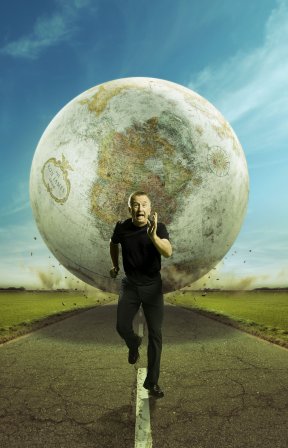 Today is a big day for both me and Ron James.Â  But more importantly Ron James (I’ll get to me later.) Today the Canadian funny-guy will attempt to set the world record for the most tweets in a single day – and heâ€™s inviting the world to follow along.Â  In fact, for every mention of the official hashtag #RonJames on December 15, a non-perishable item will be donated to Food Banks Canada. So if you are on Twitter, you should see if you can tweet #ronjames as much as possible! You can also follow Ron James on his marathon of tweets on his own twitter page at @TheRonJamesShow.

Supported by a crack team of technical specialists, Ron will begin his day at 7:00am and sign off sixteen hours later at 11:00pm.Â  Both online and on the run, Ron will be hoping to send out at least 500 tweets during the day â€“ thatâ€™s nearly one message every 90 seconds that heâ€™s online.Â  I’m not quite sure that will break the world record because I know some really annoying people on Twitter, who seem to tweet more than that.Â  But I certainly have my fingers crossed.

Before Ron James started on his search for the world record, I thought I should probably interview him, in what I consider to be a very serious and hard-hitting piece of journalism.

Bloggity: Why Twitter, why the Food Banks Canada?
Ron James: If I’m going to fill cyberspace with the innocuous details of my daily life, I figure I might as well try and do something useful as well.

Bloggity: Who will be your twitter inspirations: Bieber or Gaga?
Ron James: Tough call. You might as well have asked Socrates or Aristotle, Neil Young or Bob Dylan. Talk about Sophie’s Choice.

Bloggity: What will your 432nd tweet be about?
Ron James: Where’s the Advil? My thumbs are killing me.

Bloggity:What other world records to you hope to break in your life time?
Ron James: I’d like to set the record for most consecutive viewing of Where Eagles Dare by a man in his pajamas.

This ladies and gentleman was my 3,000th blog post!Â  I had plans to do a big retrospective post about what the last 2,999 posts have meant to me and highlight some of my favourites.Â  But instead, I thought it would be way more cool to just say thanks.Â  Thanks for checking out the blog, thanks for coming along for the ride and most of all…just thanks. You guys are awesome. If this wasn’t a blast for me, I wouldn’t be able to get this far.Â  But all your comments, tweets and general interactions make this one of the coolest jobs around.Â  I’m a pretty lucky guy!Â  Here’s to 3,000 more!