Interview: Puppetry of The Penis 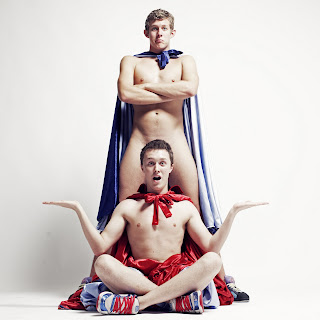 It’s hard to ignore any press release that starts with: “Calgary Loves The Penis.” Assuming it wasn’t about one of our alderman, I continued reading.

Since the, I’ve been struggling all week with how to describe Puppetry of The Penis. I’m mean sure, the title says a lot, but does it say it all? I’ll let the perfectly worded press release speak for itself:
“Requiring amazing concentration, astonishing stamina, an unbelievable stretch factor and a remarkable level of testicular fortitude, this show leaves women and men gasping at over 40 heroic and hilarious penis installations including the Pelican, The Windsurfer, The Eiffel Tower, Loch Ness Monster,and their signature installation, the hamburger.”
Intrigued? Horrified? I think I’m a little of both. And in case you are wondering, they classify the show as an adult, non-sexual show. So use your own discretion. This also means that for me and my friends, it’s a must see.
Puppetry of The Penis is currently on a cross Canada trek and because I was desperately curious, I got the chance to ask Puppet Masters Rich Binning and Christopher J. Cannon, a couple of questions about their seemingly questionable career choices.
Obviously it must take a lot to make you blush. What exactly makes you blush?
Rich Binnging: Honestly, I hate people looking at my bare feet. They’re not gross or anything, but I get really uncomfortable when people look at them. Sneakers are the only thing we wear during the show, thank God!
Chris Cannon: Because there are times during the show when I have my back to the audience, I get self conscious when people yell comments about my butt. Thank god I can turn around and show them my dick instead.
How did you introduce your career choice to your parents?
RB: My mom had never heard of the show before, so I started by explaining that I got offered an off-Broadway and U.S./ Canadian tour contract for a comedy show…. oh, and I’m naked…. the whole time…. and I’m making shapes out of my genitals. It kind of blew her mind, but she flew out to New York to see it. She was very proud of me. She’s also taking a busload of people from my hometown to see us in Chicago.
CC: I actually saw this show with my mother several years ago in Portland. I’m sure there was the element of surprise when she saw her own son, but she was happy for me and has seen the show a few times with me in it.
Do people ever try to show you their own penis installations?
RB: Hardly ever. We try to get guys to join us on stage to make a hamburger, but they usually get shy. Maybe only 25% of the time does any guy join us on stage. But we encourage it, and we’re all about seeing some new installations!
CC: Once a guy came and joined us on stage and he was trying to get hard. Very weird… actually it was beyond weird.
Are there any installations that you are currently working on that you can’t seem to figure out?
RB: Currently we’re working on a couple new prop tricks, an E.T., which will require a red light to shine through our scrotum. Also we’re working on a Dolly Parton. We haven’t found the right wig yet, but our balls will come in handy to create her boobs.
CC: A typical day consists of Rich running into my hotel room with a new trick. Every now and then we unveil one for an audience.
Are there other types of puppetry you are interested in trying? Marionettes perhaps?
RB: My old college roommate is really big in the real puppet world. He got me interested in puppeteering while we were in school. I doubt he would consider what we do in the show actual puppeteering, but it sure is creative! I’m a little nervous about tying a string around my penis, but doing a little marionette routine might be fun.
CC: Are there other types of puppetry you are interested in trying? Marionettes perhaps? Penis Puppetry is good enough for me! Just working on my ventriloquism.
Tickets for PUPPETRY OF THE PENIS on Wednesday, October 28th at 7:00 p.m. and 9:30 p.m. in Calgary are available at EPCOR Centre or at ticketmaster.ca
Other upcoming dates will see PoP doing shows in Winnipeg, Kitchener and Hamilton.