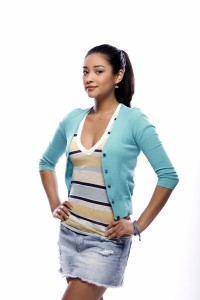 I actually don’t want you to read this interview.Â  Well not if you value your time or enjoy the fresh outdoors.Â  It may sound silly, but I know that as soon as you read this interview with Shay Mitchell from the insanely addictive Pretty Little Liars you are going to want to watch the show. Which would be fine if you would only be able to watch just one episode, but I’m telling you now, you will not be able to stop watching this murder-mystery series which has developed into a heroin-like mix of Desperate Housewives, Gossip Girl and I Know What You Did Last Summer.

Shay Mitchell plays the sexually confused and possible murderer Emily Fields and this interview is going to make you want to watch the show and that will inevitably lead to ignoring your friends and family while you devour ten delicious episodes of the series that airs on MuchMusic.Â  What makes this interview even worse is that Mitchell is ridiculously nice.Â  You’ll drool over the fact that the Vancouver-native is all too excited to about her love of Canada, how she misses being understood and even lets a few secrets of the Summer finale slip out.

Mike’s Bloggity Blog: The success of the show has almost been immediate.Â  What has the past couple of months been like for you?
Shay Mitchell: It was like riding a wave and it still is. And it was just one thing after another and it just kept getting more and more amazing and I donâ€™t even know how thatâ€™s possible because it was amazing from the start. The reactions from fans around the world has been crazy too. And Iâ€™m just living in the moment and enjoying it the best that I can!

MBB:The show’s story lines always have so many twists and turns, do you ever try to guess who the real killer is?
SM: I could try and I always wonder what else they are going to do, but then when we actually get the script it is always completely different. I donâ€™t know how the writers do it but it just keeps on getting crazier and crazier. Iâ€™ve learned to not expect anything and just see what they have in-store for us!

MBB: It’s been revealed that your character Emily is coming to terms with her sexuality, can you talk about what that experience portraying that has been like?
SM: I think I really do understand where Emily is coming from. People still think that the lines of sexual orientation are black and white, but they really arenâ€™t. And there are so many people that are in the middle, they arenâ€™t either/or. They donâ€™t want to be labeled. And I think with Emily she is just enjoying the relationship she is having with these people. Iâ€™m just going along for the ride with her. At no point in time is it every awkward for me. 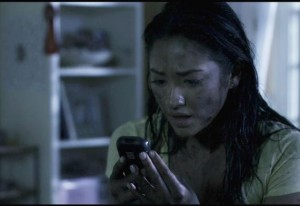 MBB: So much of the show revolves around the girls getting mysterious text messages, what is your social media life like?
SM: Since the show, weâ€™ve all gotten twitter (@shaymitch) and facebook. I would say that I am that type of that girl, I do have my phone on me a lot. Although when I go home to Vancouver next week, Iâ€™m going to try to leave it at home as much as possible.

MBB: Are you a good secret keeper?
SM: I am, I definitely am. I think my friends tell me their deepest darkest secrets only because they know it wonâ€™t ever come out.

MBB: With the quick success of the show, how do you keep a level-head in Hollywood?
SM: When I was younger, I had gone to parties and stuff like that but now I honestly take advantage of the beautiful weather that we get here in L.A. Iâ€™ve been so active and I’ve been busy discovering new pockets of Los Angeles. Also, having such amazing friends and family who really know who I am is always great. I talk to my parents like twice a day, so I think having such a solid group of people close by really does help. There is so much more that I want to in the future. And not just acting, I really want to be able to give back and that is really what Iâ€™m looking towards. 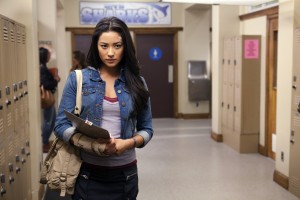 MBB: You’ve been on Canadian shows like Degrassi and Rookie Blue are their sets much different than Pretty Little Liars?
SM: No, not really. I think here driving on to the Warner Brothers lot is pretty amazing. But when I was on those other sets, Degrassi is a really big set too. And it was really cool to be around all the police stuff on Rookie Blue. I think the biggest difference is when I talk â€œCanadianâ€ on the set. I get made fun of for saying ‘eh’ or ‘washroom’ a lot

MBB: Since the Summer finale will be airing on Tuesday night and we won’t see any new episodes until January, can you give us a little scoop about the last episode?
SM: Fans will be getting introduced to a new character who will have an impact on one of us and one of the girls could possibly find out who â€œAâ€ is.

The Summer Finale of Pretty Little Liars airs on MuchMusic this Tuesday at 8pm EST. You an catch on the entire season on Muchmusic.com.