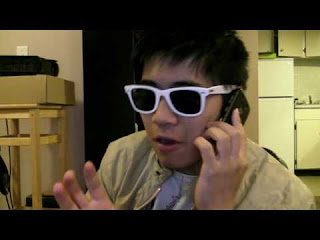 For the past year, Canada has been keeping a dirty little secret.

His name is Peter Chao and whether you like he him or not, he has become one of our country’s biggest YouTube stars. And when I say you might not like him, I mean it. His sense of humor would make Sarah Silverman shutter and even George Carlin would tell him not to swear so much, but youtube viewers don’t seem to mind!

In his videos, Chao talks about anything that is on his mind. Sometimes he rants about dating, Kanye West, Twilight or even his small-penis. Like I said, anything.

His videos regularly attract more than a million views and in a little over a year, he has become the fourth most subscribed personality of all-time!

Chao is based in Vancouver and often gets stopped on the street by screaming fans. I recently got the chance to chat with the rising-Canadian star about where he’s been, where he’s going and what how he plans on getting himself on an Olympic medal!

***a little bit of a warning, the content is definitely for grown-ups, maybe you should watch one of his videos first, just to know what you are in for!***

What was Peter Chao doing two years ago?

Two years ago, PChao in HK going to college and my mark go down from A+ to A- and Mama Chao say how am I going to be so smart if I don’t get Straight A+. So that prostitute tell me come to Canada where even if I get A-, I make all the White ppl look like certify retard.

Do you have plans for the Olympics?

I have plan to hit up the medal ceremony! I wish I can knock over the winner and stand on top of podium but then I will get kill by policeman and security. That’s no good.

What is your idea of a great first day?

You’ve just released a line of t-shirts, what is next in the Peter Chao line?

More and more design to come – I work with very talent graphic designer and we work together on the ideas. I want to give all my fans the choice, not just one shirt or two shirt like all other YouTubers.

Mama Chao has already made an appearance in your videos, will we be seeing other members of your family?

If I ever find my asshole father, I try to see if he want in the video. Maybe I find him at Olympics.

All my fan usually pretty shy but I guess the guy that shout out to me from his BMW – he was pretty hardcore. Of course a lot of female fan want the date with me. And if they not so ugly – I say YES!

You love The Arka Teks, what other bands to you listen to?

I listen to a lot of rap, I can relate a lot with Kanye because he a big asshole just like me! I love myself! And Tik Tok by Kesha – that shit stay in your head for long time! Anything with poppy commercial sound make me groove better!

or check out the rest of his videos….if you dare!