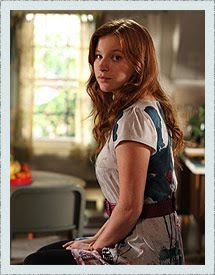 It’s no secret that being a Canadian actor is difficult. Any actor who’s landed one role on a t.v. series will tell you how grateful they are. Rarely does it happen twice, especially before you’ve turned twenty-three years old. Unless, of course, you’re Stacey Farber.

Most people know Farber as the emotionally turbulent Elly Nash on the long-running show Degrassi: The Next Generation. For seven years she was a fan favourite as Canadians watched her grow up on stage. But now her fans can catch Farber on the new CBC series 18 to Life. She and co-star Michael Seater (Life With Derek) play a couple who decide to tie the knot at the tender age of 18.

Four weeks in, it looks like Farber can add a second television hit to her resume. And she couldn’t be more excited. “I’m thrilled, I knew the show was good when we shot the pilot two years ago. I’ve been working on it for a really long time and I’m excited that people finally get to enjoy it.”

And CBC seems to agree: although word on a second season won’t be official until April, you would’ve had to have been under a rock not to notice Farber and Seater’s faces plastered all over the country. “It is so embarrassing, it on subways, billboards, magazine, it’s everywhere. I got into a taxi the other day and there was a magazine that was lining the floor of the cab. The magazine had our ad on the back and I got to put my dirty boots on my face, I thought it was funny or ironic, or something like that.”

It’d be impossible to talk to Stacy and not bring up Degrassi. “I loved being on Degrassi and I really liked playing Ellie.” And what about the difference between her character on 18 to Life? Jessie hasn’t tried to do bodily harm to herself once. “Now that my run on that show is done, I can look at it like this complete thing, from start to finish. I can break down the character for the good and bad things. If I could have picked a character, I would have picked Ellie. I had the best storyline in the movie and it all concluded there. But Jessie is definitely different!” So what if Stacey had an 18-year-old of her own? Would she let her get married so young? “Oh my god, I can’t think about that. Probably not no, but she’d be a legal adult. That’s the trouble in our pilot.” 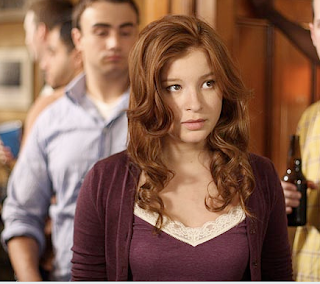 What makes 18 to Life so strong is its supporting cast. Jessie and Tom’s parents are played by Canadian stage veterans Peter Keleghan, Ellen David, Al Goulem, and Angela Asher. Combined with Seater and Farber, that’s a lot of Canadian talent! “It is an interesting dynamic, Michael Seater is a real pro and more experienced than I am, he’s gone through series to series since he was eight years old. And I definitely have a lot more experience than most Canadian actresses, just from being on Degrassi. We bring a unique amount of knowledge about the industry. And in some ways even though the actors that play our parents have been doing this for a long time, we’ve experienced some things that they haven’t. We learn from them in terms of technique or acting within a scene, but I feel they were impressed with how much we knew how the industry worked.”

Since she and Seater are playing a newly married couple, their dialogue switches pretty frequently between talking about homework to arguing about morning sex. Should her younger Degrassi fans take note? “I did think about that, but I’d be more concerned with Michael’s fan base is even younger because of Life With Derek. That is a much more clean-cut show than Degrassi, where as my younger fan-base has already seen me to do really racy things on Degrassi. The topics on that show were far more controversial than anything we would show on 18 to Life. There is a lot of kissing and reference to sex, but it is a pretty wholesome show.”

With the first season complete, the recent university graduate is like so many other Canadian actors: looking for work. “It seems that there isn’t that much to audition for in Toronto right now. I’ve never really done the whole ‘professional actor-waiting around thing’ before, so this is the first time and from what I’ve heard, things are really quite during the winter.” But it hasn’t been a complete dry spell: Farber just filmed two high-profile projects, a new movie for MTV called Made and an episode of the CTV hit Flashpoint. 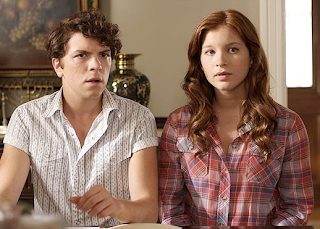 Like many actors, Farber has begun using Twitter (@staceyfarber18) to connect with her fans. And as for reading blogs and googling herself? “I used to when I was in university and I would spend lots more time on the computer, but now I spend way less time on the computer, but I haven’t been that good at following websites or reading blogs.”
Lastly, I know that Degrassi fans would hate me if I didn’t ask the inevitable question: have we seen the last of Ellie Nash? “I don’t know, I don’t think so. They are still going, but it’s always open-ended, but I haven’t been on contract for that show for years. I wouldn’t say it is over for good, but all my story lines were wrapped up in the movie, so I would be hesitant to go back from some fluffy b-plot in an episode.”
What is exciting about Stacey is that even though we’ve seen her do so much already, you get a sense that she is just getting started. She is definitely one to watch…..tonight….on 18 To Life….on CBC.
stacey farber