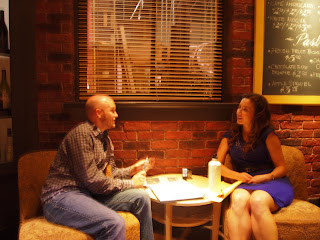 You would have to be living under a rock to not have heard of CBC’s Being Erica (Soapnet in the States). Posters are everywhere, commercials are non-stop and the ratings? Well, like all cult-ish shows, the ratings aren’t amazing. But they were good enough for CBC to bring the show back for a second season, of course it helped that the critics and fans of the show would have rioted worse than they did when they got rid of the Hockey Night in Canada song. Plus I’m sure the show’s nine Gemini nominations didn’t hurt. The show’s star, Erin Karpluk and Michael Riley, both picked up nominations for the awards, which are handed out next month.

I had the opportunity to visit the Being Erica set. I also got the chance to chat with Erin and she literally couldn’t be nicer and more gracious. I was interested to see how Erin was dealing with the rocketing popularity of the show, what it was like to be Canadian actress and most importantly what was in store for the one and only, Erica Strange.

Now that you are almost done filming the second season, how is the experience different than filming the first?
It wasnâ€™t so different, I kind of felt like I was coming home. I had no idea what was in store for the second season, but it felt very natural to come back. I was excited to get going, especially once I started reading the scripts. They took it (the show) in such a different direction. I felt like if Erica kept going in the same direction, how many regrets can this girl have? When I read the first script of the second season, they blew open the doors of the show and I was really excited!
Between Ericaâ€™s co-workers, friends and family, the showâ€™s cast is quite big; is that something that continues in the second season?
Absolutely. Whenever Erika travels time-travels, the same people need to be there for certain points in her life. Ethan, Judith, Jenny, Katie are there. Plus some of the guest stars like Alex Berlin and Zack from Ericaâ€™s High School are back too.
I have regrets all over Canada, but Ericaâ€™s seem to be mostly in Toronto. Will Erica be doing some traveling?
A lot of them are at University, Camp, she goes to Taipei as an ESL teacher.
One of the showâ€™s most popular episodes was Everything She Wants, where Cassidy, a girl from Ericaâ€™s past, tries to seduce her. Anna Silk is now nominated for a Gemini for her portrayal of Cassidy. Will there be more to that story?
Well actually, there is a post-card from Cassidy that is on Ericaâ€™s Desk. She gave it to her at the end of that episode. Itâ€™s there if you are really looking for it. So Cassidy is never far from Ericaâ€™s thoughts. That is by far my favourite episode of the season. I wasnâ€™t sure about it at first but, the message that you can give your body but not your mind, you can give your mind to somebody but not your body. But who do you give both to? If you are going to watch one episode of the first season, I always tell people to watch that one.
This yearâ€™s Geminis are going to be in Calgary. Since you were born in Jasper, what does it mean for you to have the awards in Alberta?
So Amazing! Itâ€™s my home province. Iâ€™m just so happy that the show is nominated. My family is my date, so itâ€™s good for them too. I have lots of friends there, so I can get some visits in at the same time.
Being Erica has a huge online following. What is Erin Karplukâ€™s life like online? Do you google yourself?
When the show first came out, I read a couple of reviews of the show. And then I got away from it. Itâ€™s better for me to stick to my job and do my best. Weâ€™re so lucky because for the most part, itâ€™s all positive online. There is a facebook site that is dedicated to Erica Strange, but I donâ€™t run it. Although, there is an Erin Karpluk fan page that I have someone help me with.
What do you think of the recent resurgence of Canadian shows, especially south of the border?
Itâ€™s always a hard question for me, because Iâ€™ve made my living doing Canadian television. And Iâ€™ve been apart of wonderful Canadian shows like Godivaâ€™s. The cast and crew was awesome on that, and I thought the production values were great. I get the compliment that Being Erica doesnâ€™t look â€œCanadianâ€, but itâ€™s double-sided for me. Because Iâ€™m so proud of the work that the cast and crews have done in the past. But yeah, we definitely can compete with American shows. Everything about the show is Canadian, the actors, the crew, quite a lot of the music. It can definitely stand on outside of Canada. And I like that they use Toronto for itself, so thatâ€™s exciting.
As a Canadian actress, do you have a preference to work on Canadian or American projects?
Unfortunately, you go where the work is. There are projects that Iâ€™d want to be of more than others, but I think that is sort of standard. And thatâ€™s the thing, I donâ€™t really get the East cost, West Coast rift. And I certainly donâ€™t have any quams with the States and Canada. If you are an actor, you go where the work is. I love that I get to travel for my job. Youâ€™ve had so many great things come out of Being Erica.
What was your first â€œpinch meâ€ moment with the show?
There are so many. When we wrapped last year, we were shooting all day and then the producers came down with champagne for everyone. The whole crew was in the studio and I was shooting up until the last second. I love our cast and crew and they gave me a little gift, and I just felt overwhelmed by how much we had accomplished in five months and by how much I was supported by these talented people and being so grateful for their professionalism, I was going to say something, but then I got a little teary eyed, so I just said â€œLetâ€™s Party!â€
Being Erica airs Tuesday nightâ€™s on CBC. You can watch full episodes for free on their website.
side note: It should be pointed out that I have Erin Karpluk on audio saying that she reads and loves Mike’s Bloggity Blog. I can die a happy bald man.
erin karpluk