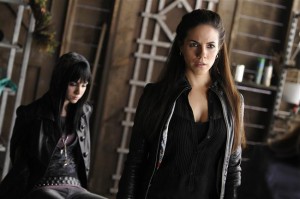 When Lost Girl premieres tonight on Showcase, Canada will be getting there first real look at Anna Silk, one of our biggest stars in the making.Â  Like Erin Karpluk, Silk is seemingly one Shonda Rhimes reading away from beingÂ  taken from Canada.

In Lost Girl, Anna plays a mysterious character named Bo, a supernatural seductress who is succubus raised by humans, who just discovered she was born of a secret line of inhuman beings called Fae.Â  Essentially, you aren’t going to want to watch this show in the same room as teenage boys.

You’ve undoubtedly noticed that the buzz around the show and Silk seems to get bigger and bigger every week. She was recently nominated for a Gemini for guesting on Being Erica and now she is headlining one of the coolest shows I’ve seen in a really long time.Â  Needless to say, she’s come a long way since playingÂ  a stressed out flight attendant in the popular Nicorette commercials.

During her recent visit to Calgary, I got the chance to talk to Silk about her dramatic rise to lead actress, how she learned to kick some ass and if Canadian TV is living up to its reputation. And yes, I asked if Cassidy will ever come back to Being Erica!

(Context: Anna and I are actually both from Fredericton, NB. But even though we seem to know all the same people, we actually didn’t meet until a few months ago.)

There are a ton of fight scenes in Lost Girl, what sorta training did you have?
Well I had a stunt double, who is awesome.Â  You could always tell when it was my stunt double Jenna, because she would do the craziest stuff.Â  I also did a lot of training on the weekends.Â  And eventually they trained me so well that I was actually able to do a lot of the stunts myself, but she did anything that was crazy.Â  My stunt double definitely made me look good.

You’re not really known for being the kick-ass type.Â  Were you worried about taking on such a tough role?
I always wanted to play a tough cookie.Â  When I first read the outline, IÂ  thought:Â  “Oh my god this was totally written by a guy.”Â  But it was written by Michelle Lovretta who also created it. She wrote this female character that was so strong but really, really vulnerable.Â  And that’s why I identified with it. And I think that is where people are going to be able to identify with Bo. She’s naive and doesn’t really know how powerful she is. 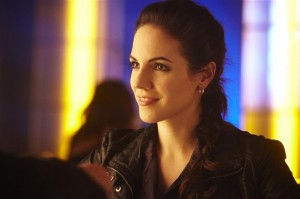 I’m almost embarrassed to admit this, but some of scenes really scared me, is Lost Girl supposed to be so scary?
The Fae is this dark and creepy world.Â  It is a real education for Bo.

Canada’s history with sci-fi shows is a bit dodgy, do you think Canadians can get behind such a different show?

I hope so!Â  I think its appeal goes beyond the sci-fi aspect of the show. I think that we have really strong characters who are likable, even the bad ones.Â  We had some great actors on the show who played some amazing characters.Â  Bo is figuring out where she came from, figuring out how she fits into the Fae world and why did she grow up thinking she was human.

You’ve never really been a series regular before, what has the transition been like?
It is a total dream for me, it really is.Â  In some ways it was easier and in some ways it was harder. And I’ve been really lucky to secure some really great guest-spots.Â  Being Erica was wonderful, Billable Hours was also really fun. But when you get to play the same character every single day for 13 episodes, you really start to protect your own character and you get to develop them over a whole story.Â  In some ways it is easier because you are so immersed in your character you just go in and you do it, in other ways it is harder because you are so tired.

Do you feel pressure carrying the show?
Definitely.Â  But I think the pressure comes from a good place because the cast and the crew loved working on the show. It was a really cohesive group of talented people.Â  So in that way you don’t want to let that down. 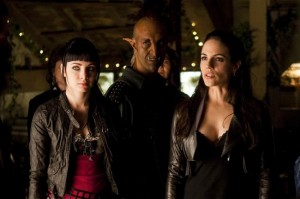 You are from New Brunswick, was it hard to come from such a small place and try to make yourself known in a city like Toronto, when there are so many people trying to be actors that are from there?
It almost feels like the decision was made for me, but it wasn’t, obviously I made the decision, I made the move, I did the work I had to do.Â  But nothing felt strained, nothing felt forced, everything had its natural progression.Â  The only thing I say to people who are starting out thinking that it is as simple has getting an agent,Â  it has to be something that you love and you have to decide what is right for you and stick to it.Â Â  Otherwise you will do too much for other people and not have a career path.Â  I loved the journey and it is easier to say now that I’ve had a little bit success.Â  But even if I hadn’t, I would still be doing it because I love it.

Up until this point, you’ve stuck to television.Â  Do you see yourself doing film?
It wasn’t necessarily a choice.Â  I really love television.Â  I love telling a story week to week.Â Â  I’d love to do film, I’ve done very little of it, but movies moves at a different pace and it gives you some breathing room.

Once you’ve finished the promo for Lost Girl, what’s next?
Going back to LA and keep auditioning.Â  And my husband is Jewish and I’m actually going to be converting, so we will be starting classes next week!

And what about Being Erica season 3?Â  You were nominated for a Gemini for playing Cassidy, will we see her again?
Yeah!Â  Cassidy comes back!

There’ s been a LOT of debate lately about the quality of television.Â  Care to weigh in?
I think what I’ve noticed is that people are saying that Lost Girl doesn’t “look Canadian.”Â  And I get it, I take it as a compliment.Â  But I think newer shows can redefine what Canadian TV looks like.Â  And right now there is a so much great Canadian TV out there, especially because there are so many people that make a great product!

You’ve had a ton of momentum since your Gemini nomination, how you pinched yourself yet?

Honestly, it is a total dream come true.Â  And I think: Oh god, I’m carrying a show. Can I do that?Â  And then I look around the set and see that everyone is there doing something for something that I’m about to do, not by myself obviously, I had lots of support.Â  It was nice to have people believe in me. I would help anyone because so many have helped me.Â  I’ve always believed that from the very start that it is a “Pay It Forward” type of business. Even when you are a nobody, always pay it forward.Â  If you walk into a roomÂ  and if you have this sense of entitlement, forget it, just forget.

When I first moved to Toronto, I would read against these girls who were so strong, beautiful and I thought I had to change to make this work. But I didn’t have to.Â  I just had to be really strong on the path that I was on.Â  I believed that there was a place for me in the industry that was a good place, that I could contribute and be creative. where I could be happy and be creative.

And you have to really love it.Â  Because you give 150% into an industry that doesn’t give a dime back to for many years. It is not give and take at the beginning. And it can also be taken away from you at any second, you just don’t know.