If you think that just because itâ€™s the summer, there is nothing good on TV, then think again. Tonight, Showcase kicks off a brand new comedy block that includes Spennyâ€™s new comedy â€œSingle White Spennyâ€, new episodes of Curb Your Enthusiasm and Itâ€™s Always Sunny in Philadelphia. Joining the three shows is another freshmen series: Almost Heroes.

A great mix of â€™30 Rockâ€™ meets â€˜The Big Bang Theoryâ€™, the show sees Terry (Paul Campbell; Battlestar Galalctica, Knight Rider) return home, after the death of his father, to run the familyâ€™s comic book store. Helping (or hindering) him along the away is a hilarious cast of characters which includes his brother Peter (Ryan Belleville; Finn on the Fly, Life on a Stick), Boyd (Colin Mochrie; The Kids in the Hall: Death Comes To Town, Whoâ€™s Line is it Anyway), childhood friend Bernie (Lauren Ash; Howie Do It, Lars and The Real Girl) and property manager Rayna (Athena Karkanis; The Border, The Best Years).

Just before the series premiere, I got the chance to interview Campbell, who wasnâ€™t worried about being taking on the crazy cast of characters and going up against perhaps the scariest thing of all: The Canadian comedy!

Much of your resume has focused on dramas and thrillers, was tackling comedy intimidating?
Paul: When I graduated from theatre school, I was convinced that I was built for drama. The stuff that I really connected with initially was the drama stuff was so cathartic for me. I was sure that I would make a career out of playing dark, brooding characters like I did on Battlestar Gallactica. But then I was lucky enough to do a comedy pilot with Bill Lawrence (Scrubs, Cougar Town) and I had the time of my life and since then, itâ€™s kinda been my bread and better. To be honest, I like doing comedy more!

Is it easier to do comedies or drama?
Paul:The dramas are probably easier because with comedy you are really putting yourself out there more. You have to be more vulnerable as a comedian, either itâ€™s funny or itâ€™s not. With drama, it seems like there is a much broader perspective. With comedy, youâ€™re not like “kinda funny”, youâ€™re either funny or you’re not funny. You really have to put yourself out there and thatâ€™s a hard thing to do.

You work with some pretty funny people on Almost Heroes, did working with such well known comedians drive you to be funnier?
Paul: I think one of the great things that Iâ€™ve learned is that you really have to trust that the comedy is on the page and not feel like you have to rise to the occasion. Colin Mocherie is on the show and heâ€™s a comedy legend and heâ€™s also a hero of mine. Thereâ€™s no way that I will ever be as funny as Colin Mocherie, thereâ€™s no point in even trying to rise to it. I simply have to do what Iâ€™m doing and believe that itâ€™s right. Otherwise it just becomes a circus of people trying to outdoor eachother.

You play sort of the straight man in a crazy world, how true to your real-life is Terry?
Paul: In real life, Iâ€™m fairly reserved. I wouldnâ€™t last five minutes in the world of the show, I couldnâ€™t stand five seconds with the character of Bernie, I just couldnâ€™t do it. I think thatâ€™s why sheâ€™s so lovable, you get to have five minutes with her an episode and then you donâ€™t see her for the rest of the week. 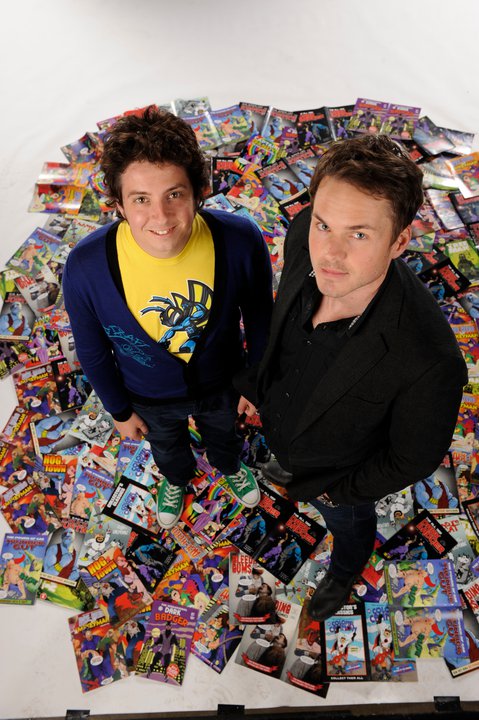 Your background is originally in theatre, do you see yourself going back to the stage some day?
Paul: I would like to. The problem with theatre is it’s difficult to find the time to commit to a theatre production. Ideally, I would get a job in TV that works, at least partially, in front of a live audience. Because so much of the thrill of the theatre is that immediate reaction from the audience. If the audience is into it and the energy is there, it will often shape a performance. Every single night that you perform is a new adventure.

I canâ€™t help but notice a few hints of Ryan Reynolds in your character, did you use any actors to inspire your performance?
Iâ€™d say no, as far as looking towards anyone when Iâ€™m thinking about my character of Terry, no. But youâ€™re spot on when you say there is a little Ryan Reynolds in my performance. I grew up watching comedies and I thought he was really funny in Van Wilder and Two Guys A Girl in a Pizza Place. Iâ€™m not conscious that Iâ€™m doing it, but thereâ€™s lots of influences, Bill Murray in Ghostbusters, the cast of SNL. Those guys know comedy just a little bit.

Youâ€™ve had such success in your career already, is there something that you did that allowed you to be such a successful actor in Canada?
I think the thing that motivated me to keep trying, was how much I wanted to make it happen. Acting is almost entirely dealing with perseverance. If you stick it out long enough, then eventually it will work out. And people just arenâ€™t able to stick it out and decide that acting is not for them. Iâ€™ve been acting for ten years and I had a lot of luck early on, but Iâ€™ve had my lean years. This is what I want to do with the rest of my life.