Okay, so I have to admit, I really didnâ€™t think I was going to love Big Brother Canada. I fully expected to watch a few episodes and then lose interest, much like other reality shows. But do you know what? Iâ€™m hooked. Even though itâ€™s only a few weeks old, the show has lived up to its American counterpart, if not surpassed it in many ways.

Last nightâ€™s Big Brother was particularly great TV, when it was revealed that current HoH Emmett, the dairy farmer from Nova Scotia had cheated and that the results of this weekâ€™s HoH would bethrown out. In all the years Iâ€™ve been watching reality TV, I donâ€™t think I had ever seen something so shocking play out. 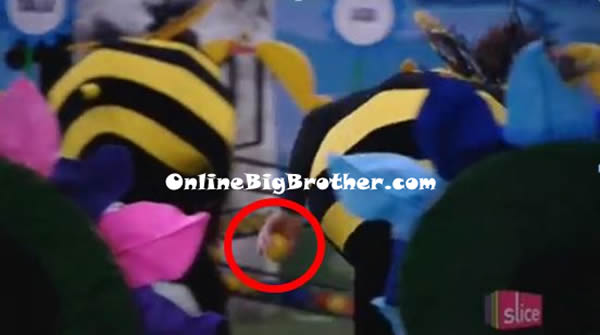 Twitter exploded on Thursday night, when the live challenge clearly showed Emmett cheating, but he was given the HoH anyway. During the competition, you could clearly see Emmett carrying the balls with his hands, when the house guests were told specifically not to do that. Hashtags about Emmettâ€™s cheating were trending across the country, with fans demanding that the challenge be redone. The producerâ€™s acknowledged the tweets by sayingâ€¦.. but viewers had to wait until Sunday to find out what happened.

Thanks to everyone for their comments about tonight’s HOH competition. Weare looking in to this further and will have more information soon

The producersâ€™ action was swift. The four house guests caught cheating (Emmett, Alec, Jillian, Tala) were made the weekâ€™s Have Nots (they eat slop for the week) and the Have Nots challenge became the new HoH challenge. Producers must have breathed a sigh of relief when Fan favourite Gary ended up winning the challenge, thus ending the reign of bullies. As he pointed out, week after week, people were being voted out simply because they were different. Actually, one astute viewer pointed out that the four people that Tom nominated during his run as HoH were all minorities. Iâ€™m not accusing him of anything, but it’s certainly an interesting observation.

When the dust finally settled on what was already Big Brother Canadaâ€™s craziest episode ever, Gary nominated Liza and Tom, both who have more alliances in the house than I can keep track of. Gary played the nominations brilliantly, saying it was essentially a house decision, meaning that he deflected all the blame on everyone else. Gary is definitely rivaling Peter for the title as the smartest player in the game.

GAH! I canâ€™t believe Iâ€™ve written 417 words about the show that I promised myself I would only watch for a week. But when a show is this good, I guess itâ€™s hard to ignore.

Catch up on Big Brother Canada with my exit interviews with all the house guests who’ve been evicted so far!