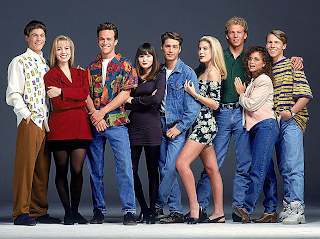 I need to get something off my chest.

So we’ve seen three episodes of the new show 90210 and people hate it. Actually, people hate it and say it pales in comparison to the orignal, including Energy 101.5’s Meg Tucker who thinks it will be canceled in six weeks.

However, I would politely disagree, especially with the comparison comment. Can we call take moment to reflect on the original Beverly Hills 90210? It sucked, it sucked a lot. It sucked so much that Melrose Place spun-off of it! And you know what sucked slightly more than 90210? Melrose Place. The only reason we think that the original was good is because it was such a culturally important part of our child/adult hood (depending on your parent’s morals). But at the end of the day, 90210 always sucked.

I mean honestly, Shannon Doherty, Jason Priestly, Jenny Garth, Luke Perry and the rest of the gang were the epitome of god-awful actors. They make Jessica Simpson seem like Jessica Tandy. But this was over 10 years ago, so it’s okay if you forget, but I challenge you to make it through an old episode that is currently repeating on TVtropolis. You can’t, you won’t, you shouldn’t. The script was awful, the stories were recycled and even when they tried to do shows on important “issues”, the characters had quickly moved on from their life lessons the very next episode. And when ever you feel like talking about the huge hole in Tori Spelling’s chest cavity, I’ve got some theories.

The new 90210 isn’t an amazing show. It’s no Lost or Brothers & Sisters, it’s not even a Gossip Girl. But it’s a show about rich teenagers in Beverly Hills, what are you expecting people? It’s an okay show, there are some funny moments and some interesting characters. But come on people give it a break and enjoy the ride. Plus if anything else, it’s only a matter of time and Andrea Zuckerman returns to a crowd of people who struggled to remember that she was even on the air.