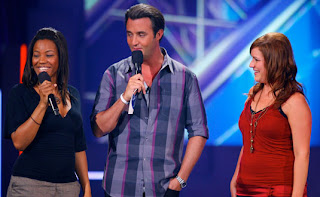 Have you been watching Canadian Idol this season? Because if you haven’t, it’s actually pretty good and should probably put down that sunscreen and pick up the remote. Â It’s great becasue the producers of the show are obviously going after a different demographic of listeners (and Ipod-owners) by selecting the singer/songwriter types to be in their Top 24 this season. And because of this there isn’t one Sanjaya-type in the group!

The producers also ruffled the Idol-Machine feathers this year by creating the very first male/female uneven Top 24. Going into the semi-finals Canadians had 15 guys and only 9 girls to choose from. This could have been alright if the Top 24 was then split-up by a draw or some other fair way, but instead the group was split up obviously to help the producers get their favorites to the eventual Top 10 (or twelve). How else do you explain why the Pigott brothers are competing on separate nights as to not have to split their audience. Â Just wait till there are inevitably both in the Top 10, that will certainly make for an awkward christmas dinner.

And because the highly talented two groups of semi-finals are completely uneven it means the poor girls of Canadian Idol have been dealt a fate worse than whoever gets stuck marrying Ben Mulroney. Â Just look at the results so far: Â In the past two weeks, 5 girls have gotten the boot versus 3 guys, including Calgary’s Jesse Cottam.

There are lots of theories about why the girls are getting the boot, at the end of the day it all comes down to producers sabotage. Aside from hard-hitting journalists like myself who watch it for research purposes the majority of Idol-watchers are women. Teenagers and moms. Because of issues that I won’t even begin to explain or pretend to understand, means that unless they are amazingly talented, most of the remaining girls probably won’t make it to the compilation CD.

Right now the four remaining girls consists of Amberly Thiessen, Katherine St-Laurent, Katelyn Dawn and Marie-Pierre Bellerose (who appeared in the Bottom 3 last week).
Why don’t we all say a little Canadian Idol Prayer for them. Â And while we are at lets ask CTV for a little relief from both Ben Mulroney and Julie Black?!
*Oh and whenever somebody wants to let me know if we are allowed to acknowledge the lack of the minorities in the Top 16 (ie: 1…maybe 2), just let me know.