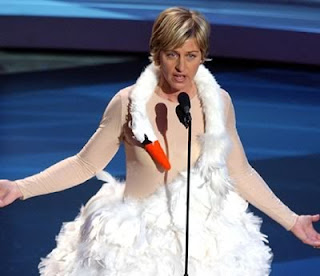 FOX just released a statement that Ellen is the new judge for the ninth season of American Idol!!!! And not just a celebrity judge, she is the replacing Paula, full time.

No, it’s not April 1st. Although, I wouldn’t blame you for looking.
What an interesting choice. I kinda still don’t believe it. Something doesn’t seem right here. I sorta feel like we are being pranked, but by all accounts it seems legit.
It’s such a solid move by FOX. I mean, if they are going to replace Paula with anyone, someone as likable as Ellen is really the only choice. I’m glad they didn’t go the way of hiring another 80’s has been, like Debbie Gibson or something like that.
This is exactly the re-boot the Idol needed.
Your move Paula.
I’ll probably have more on this later, but for now I still have to decompress it.