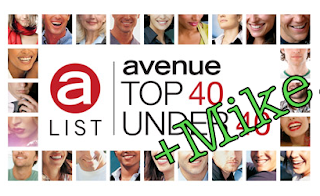 Calgary’s fancy-dancy Avenue Magazine has just launched it’s Top 40 under 40 contest. (Okay, maybe it’s not a contest, but I still want to win it. ) And yes, technically speaking, I have 12 years left to compete, but I happen to really feel like this is my year.
The only problem? I don’t think I meet the criteria. I mean, I don’t really do anything life changing, do I? I haven’t started a giant recycling program, run for city council or campaigned for bicycle lanes. I don’t even understand bicycle signals, but then again, does anyone? I do annoy the shit out of people until they participate in things like Earth Hour, but I don’t know if that is enough.
Sure I write an award winning Canadian Entertainment blog each and every single day. I also pride myself on not using the blog to spread gossip or be too mean. I always give special mention and attention to some of my favourite rising-bands. And let’s be honest, I pretty much saved Being Erica. Plus, I’m already getting better at proof-reading and just the other day, I peed in a urinal for the first time in years.
I guess I’ve always felt that accomplishment is relative.
Plus if you look at last year’s winner, there isn’t a blogger in the bunch. How can you pick Calgary’s Top 40 without including a blogger? It just doesn’t seem right. Not to mention that the Top 40 always seems like a native Calgary-club anyway. How cool would be for someone not born and raised here to be honored. Just because I happen to realize that the Calgary Stampede is just like every other city’s summer fair, it doesn’t mean I should be punished.
Does this blog post sound like a desperate plea to get nominated? You bet your Monday night happy-hour it does! Desperate times call for desperate measures. I’ve never had a professional photo shoot that isn’t taken in a studio called Sears and gosh-darnit, I want one. Plus it would be cool to be nominated, it would be even cooler to win.
If you have a view minutes to nominate someone, click here to nominate them now. If that person was me, great. If that person is someone more deserving then you could nominated them too I guess.