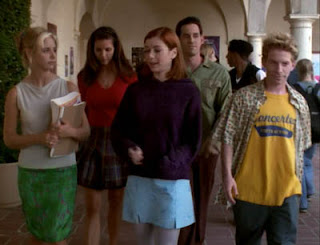 I decided this week, that I really really miss Buffy the Vampire Slayer.

I think what brought this on was the fact that in one single week I was able to catch four of the cult show’s most popular action. On How I Met Your Mother there is Alyson Hannigan. Seth Green (Werewolf Oz) was the neck bleeder on this and next week’s Grey’s Anatomy. I mentioned earlier that Nicholas Brandon (Xander) is guest starring on the scary Criminal Minds and of course we have David Boreanaz as Booth on Bones.

For me Buffy was THAT show. The show that I scheduled my life around. In Canada, it aired on Monday nights and if at all possible I would try not to work on Monday nights, but if I had to, I would never makes plans afterwards so I could watch it when I got home. (Remember VHS? -good times-)

For a long time (high school), I was ashamed of my love for Buffy. I tried to keep quite about it, but when Entertainment Weekly dedicated an entire issue to the show, I knew I was no longer alone. (Fun fact: I actually had my Letter to the Editor published in the magazine, thanking them for issue. I still have it)

In University, I met a loyal group of fans that consisted both of students and professors. My friendship with Erin actually was founded on the basis of our mutual admiration for Buffy.

Actual dialogue:
me: “I think Beowulf is crap, but what do I know? I like Buffy.”
erin: “Actually Mike, I too love buffy and I think you are full of crap.“

Since then there has been a growing movement of people who have discovered both Buffy and it’s spin off Angel on DVD. And since it went off the air there have been very few shows that get me excited as Buffy once did. Veronica Mars was great, but it was easy to compare it to Buffy. The 2nd season of Grey’s Anatomy was equally exciting, but it missed that…pun notice…bite.

So while I have come to the conclusion that Buffy is indeed gone, that doesn’t mean she has to disappear forever. Whenever I feel like I’m missing her I can turn to my DVDs and pop in one of my favorite episodes. “The Body” perhaps, maybe “Once More With Feeling”, but definitely that episode where it went to the world where there was no Buffy. Still amazing.