I just backed the Kenny vs. Spenny movie and you...

If you’ve read this blog even once over the past few months, you’ll know that backing the Veronica Mars movie on Kickstarter was one of the best decisions I’ve ever made. Â So since then, I’ve been on the search for other great projects to put my meagre monies behind, and as luck would have it. I think I found it.

Remember Kenny vs. Spenny? Â That amazing docu-reality series that aired primarily on Showcase for 80+ episodes?

Well, turns outÂ Kenny Hotz and Spencer Rice are looking to take their take on the spy vs. spy-esque show on the road, film the thing and eventually turn it into a sixty minute documentary.

As always, the best part of any Kickstarter campaign are the perks and the Kenny vs. Spenny: On the Road campaign has some good (and affordable) ones! 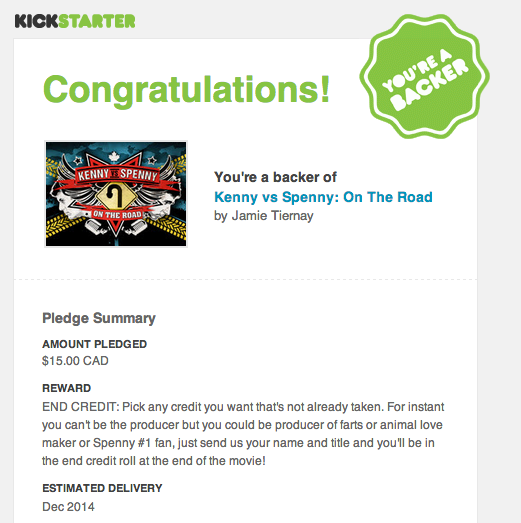 From a mention in the credits, to making a video for the movie and digital downloads, this is one of the more reasonably priced campaigns that I’ve seen! Â I ended up giving $15, which means I get to take a credit in the movie, I even get to make the title up myself. Â I’m not sure what I’m going to name my role yet, but I’m definitely considering: Blogger that looks Michael Stipe.

So far the project has raised $16,976, with a goal of $46,000. With 11 days to go, every dollar counts. Since so many people complain about Canadian content, now’s your chance to do something about it.