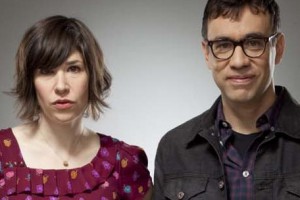 Over the Christmas break I spent time catching up my neglected Netflix Canada account. And while scanning the ever-expanding library, I noticed they’d added Portlandia, a small show that features Saturday Night Live‘s Fred Armisen and has a loyal and devoted online following. I’d heard it was funny, but otherwise knew very little about it — so my friend and I decided to watch an episode. We were immediately hooked. The show, which features a ton of Portland-based hipster-skewing sketches, was funny, biting, witty, and original. We instantly devoured the entire six-episode first season. The show’s second season debuted this past weekend on IFC.

After emerging from my Christmas slumber, I couldn’t stop talking about Portlandia whether on Twitter, on Facebook, or to unsuspecting strangers on the street. The problem? No sooner had the show appeared on Netflix Canada then it was gone. Had I somehow just imagined watching a brilliant show that managed to capture just how pretentious and annoying hipsters can actually be? Maybe. I did some Vernoica Mars-esque investigating and discovered that Netflix Canada had, in fact, posted the show and taken it down almost right away. On Jan. 3, the NetflixHelps Twitter account revealed that the show was added in “error.” The whole saga was so upsetting that I felt like squeezing on my skinny jeans, listening to the Where the Wild Things Are soundtrack and weeping silently into my craft beer.

Look: I don’t get how contracts work or how someone goes about securing rights to a TV show, but it can’t be that hard. The first season of Portlandia is only six episodes, each 22 minutes long. These six episodes are good… like, really good. And in case you haven’t visited Netflix Canada lately, it’s seriously lacking in quality content. (I’m assuming that we all agree that the only season of Jenna Elfman’s Accidentally on Purpose is not quality television.)

If you’ve never seen Portlandia, you won’t be seeing it on Netflix Canada — at least not yet. So in the interim, I suggest you catch up on it through their countless sketches posted to YouTube. “Put A Bird On It” is definitely one of my favourites. And once you fall in love with it — because I know you will — send Netflix Canada a note. If enough people do, we’ll do something the Occupy movement failed to achieve: we’ll make a difference.