How to survive a scary movie: Leave the lights on.

â€˜Tis the season for scary movies to flood the movie theatres: Sinister, Paranormal Activity 4, Silent Hill: Revelation 3D and to an extent, Hotel Transylvania are all cashing in on audiencesâ€™ love of being scared. I used to be one of them. I used to line up to see the latest fright flick, almost craving the scares I would get from a horror film. But something changed over the past few years and now, Iâ€™m almost too scared to see almost any horror movie.

Itâ€™s not that I donâ€™t want to see these scary movies anymore; I just know I canâ€™t handle them without curling up in a ball and crying. Most movies give me so much stress and anxiety; I almost find spending any amount of money on them wasteful. Why would I pay to be tortured, when I can watch a Kardashian show for free? Which got me to thinking, wouldnâ€™t it be great if movie theatres had special screenings where they left the lights on? Not for all the screenings, but just a special show once or twice during a scary movieâ€™s run. They already do screenings for parents who want to bring their kids, so why not a showing for those of us who think that if the lights are left on, nothing bad can happen?

There are lots of movies that, for a lack of a better word, I would have died to see on the big screen, but the fear of being too scared has kept me from seeing them until I can in the comfort of my own home. So by leaving the lights on in the theatres, I could finally see these movies, with the feeling of safety that comes with being in a well-lit room. 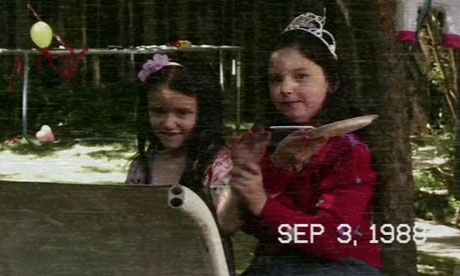 Over the years, Iâ€™ve developed a solid rulebook of what scary movies Iâ€™ll allow myself to see. I can easily handle the horror movies that mix up the blood with laughs, like Drag Me To Hell, Scream and Evil Dead. On the other hand, Iâ€™ll avoid any film that has scary children, especially if they involve the kid getting possessed by ghosts or demons.

For years, Iâ€™ve been saying that kids are out to kill us, I donâ€™t need to see it on the big screen too.But the special screenings donâ€™t have to stop there. Why not have screenings where you can talk or use your phone? I wouldnâ€™t buy a ticket to that particular screening, but it might stop those types of people from ruining the regular movie experience for the rest of us. Or how about a movie that includes a narrator for the really complicated parts? Maybe the often overcomplicated Oscar nominated movies would garner bigger box office results, if people could get the sometimes heady plots explained to them by the voice of James Earl Jones?

Film buffs and Hollywood die-hards are no doubt stressed out at the mere suggestion of altering the film viewing experience, which I totally understand. I love the movies too, however, the movie-going experience has to evolve and that includes creating special screenings for chickens like me. If we as a country have evolved to love Ben Affleck movies, surely we can learn to watch movies with the lights on too.