How to Make Alexis Bledel a star?

Every now and then Hollywood tries it’s hardest to make someone a movie star, Claire Danes, Gretchen Mol and Eva Mendes, all come to mind.

And while they’ve all seen relative success, I’ve always gotten the feeling that Hollywood expected more. Now the studios seemed to have turned their attention towards Alexis Bledel. Most popular for the role of Rory on Gilmore Girls, Bleidel saw some success in the Sisterhood of Traveling pants movies. But since those flicks were more ensemble-movies than star-vehicles, they don’t they really make her a movie star.
Rory’s….errr…sorry, Alexis’ most recent efforts are perfect examples of the studios seeing her star potential, but not really knowing what to do with it. This past summer, we saw her carry her first movie, Post Grad. The film, which is now on Blue-ray and DVD, wasn’t awful. But it wasn’t great either. The box office total was a disastrous $6.9 million. Or roughly, what James Cameron made going “number 2” today. 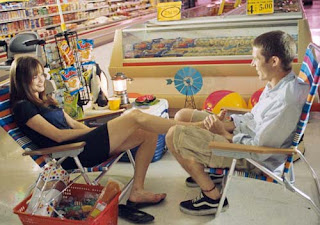 Unfortunately, her new movie doesn’t look too promising either. It’s called The Good Guy and it opens in February. You can watch the trailer below, but it’s pretty much about two guys in love with the same girl. This movie looks sort of like an unfortunate sequel to Post Grad, so you can expect similar results.
This movie is of note for several different reasons. The first being that it co-stars Anna Chlumsky of My Girl fame. Maybe Hollywood should get back to making her a movie star!? The other reason is that this is the second Alexis Bledel movie to star a cast-member of Friday Night Lights. The first was Zach Gilford in Post Grad, and now Scott Porter, who played Panthers team captain, Jason Street.
The one promising thing about this movie is that it is rated R. Could we possibly have the chance to hear Rory Gilmore drop the f-bomb? That is worth totally worth the admission price.
Here’s to Alexis Bledel finding better and more deserving projects. Remember her in Sin City? That was some awesome shit. And maybe add Taylor Kitsch to the mix, you know, just to complete the Friday Night Lights trifecta.