How to Leave Your Car at Home and Easily Explore...

One of the best part about living in Calgary is the proximity to the mountains. Â But our location is also popular with thousands upon thousands of tourists from around the world. Â I guess it’s a good problem to have. But how do you enjoy the park, without worrying about all the things that comes with thousands of people wanting to do the same thing?

Hopefully by now you’ve heard about On It Transit‘s new $10 shuttle that takes you from Calgary (Somerset or Crowfoot LRT stations) to downtown Banff for only $10 each way. If you haven’t, it’s really an amazing opportunity to explore the park without your car.

This was actually our second time taking the On It Transit and it really was just as great the second time around. Â Obviously at $10 a ticket, the value of getting to Banff is incredible. But where you really start to experience how great it is to travel to Banff National Park without your car is when you get there and realize just how easy it is to get around to some of the park’s coolest destinations on the free shuttles.

For this particular trip, we took On It Transit to Banff, then we took the free shuttle to downtown Lake Louise. 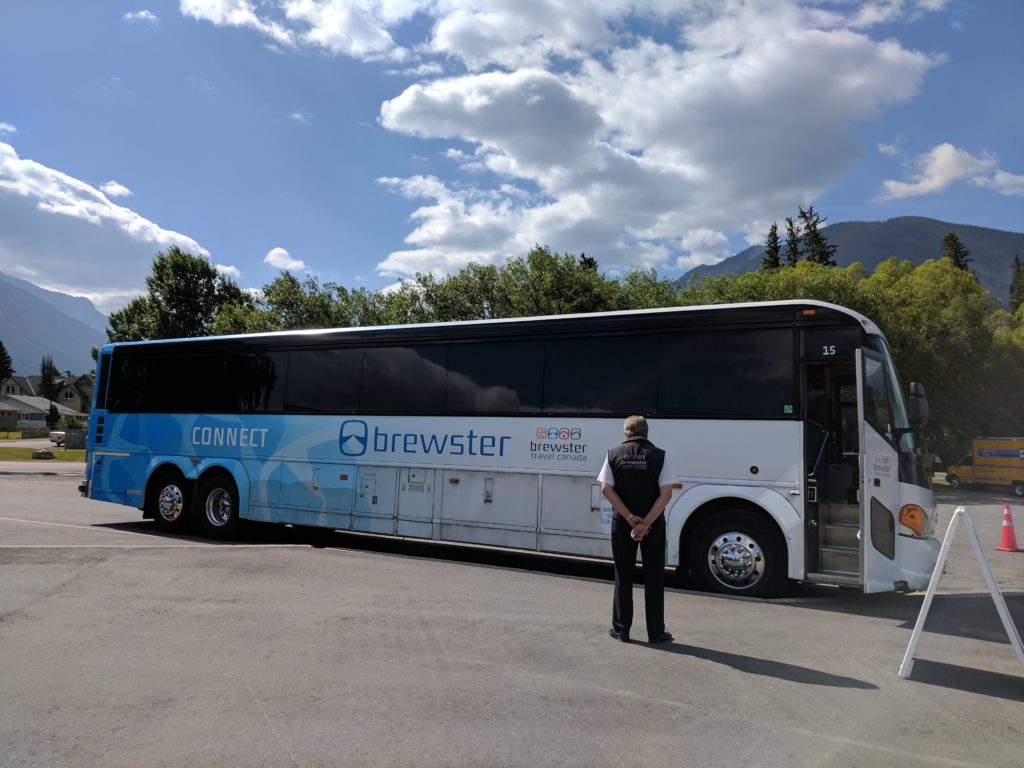 From there we, caught another free shuttle to Lake Louise Ski Resort for their summer gondola. The area is well-known for being able to spot grizzlies bears (safely high above them.) When you get to the top, you’re treated to a stunning view of Lake Louise, the Chateau Lake Louise and the Canadian rockies. It’s truly breathtaking. 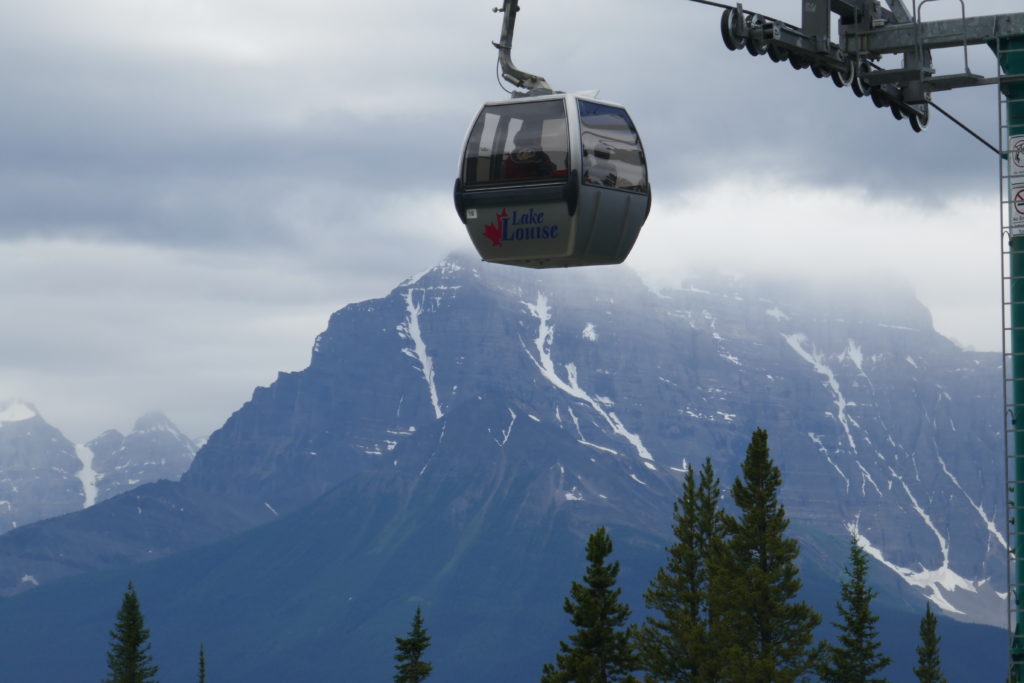 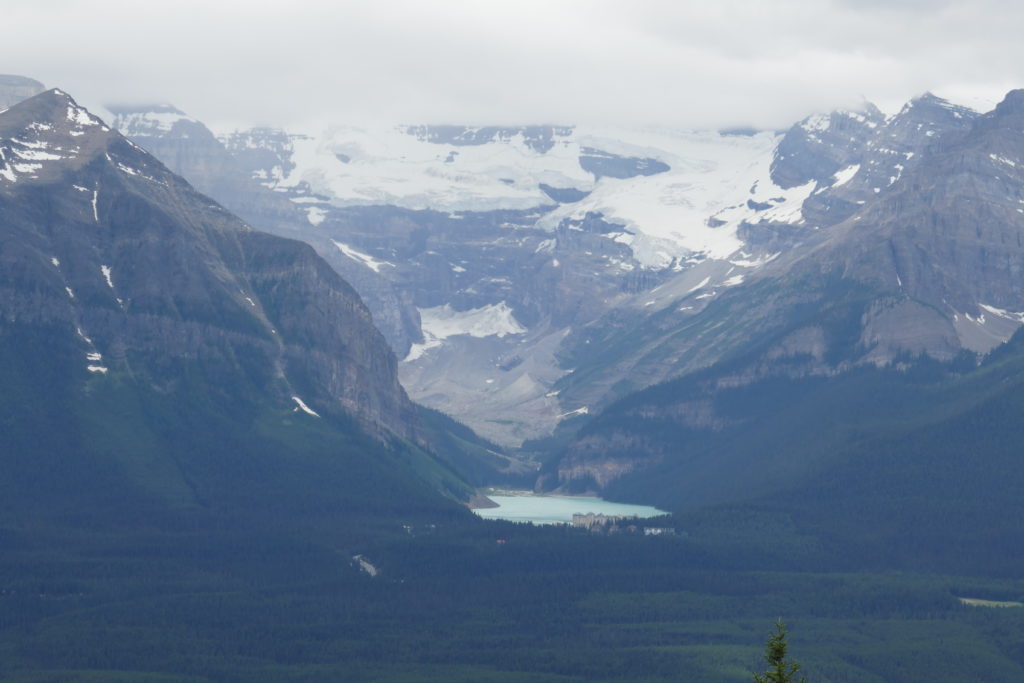 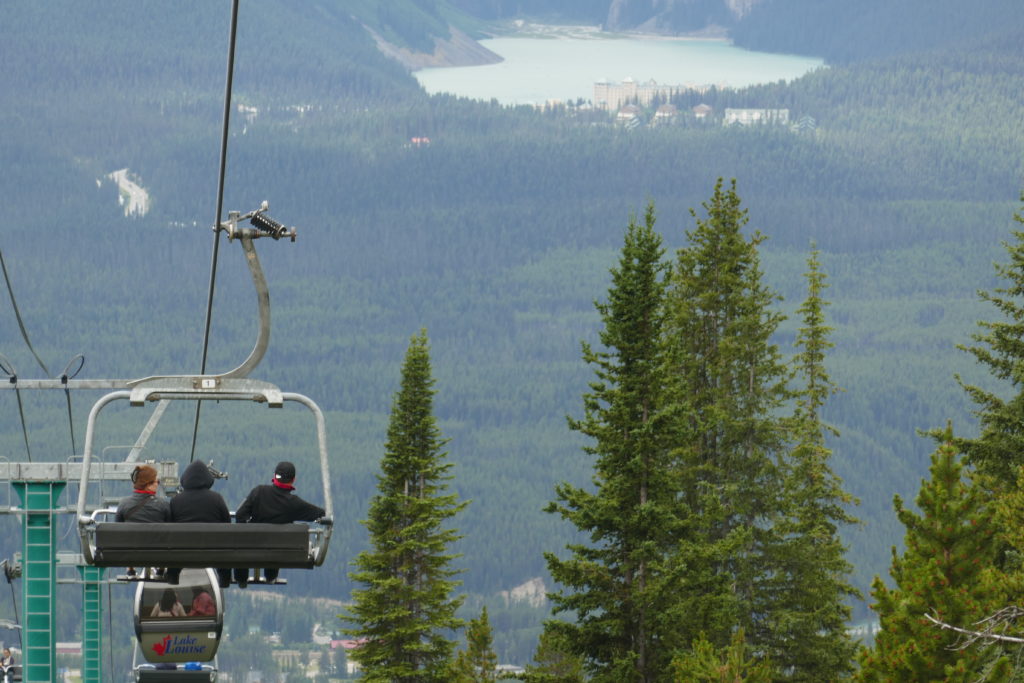 Up top, you’ll also find the Whitehorn Bistro, which I have to say has to be one of the best patios in Canada. Even though it got a little cloudy while we were up there, it was still stunning to snack on delicious dishes while sitting back and taking in the epic views. 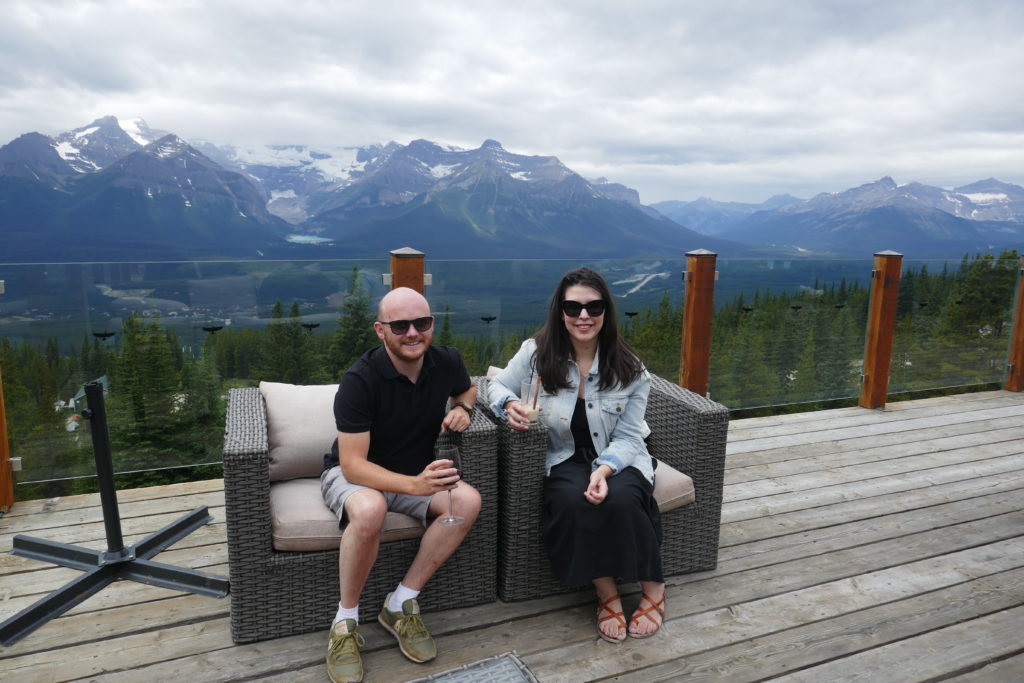 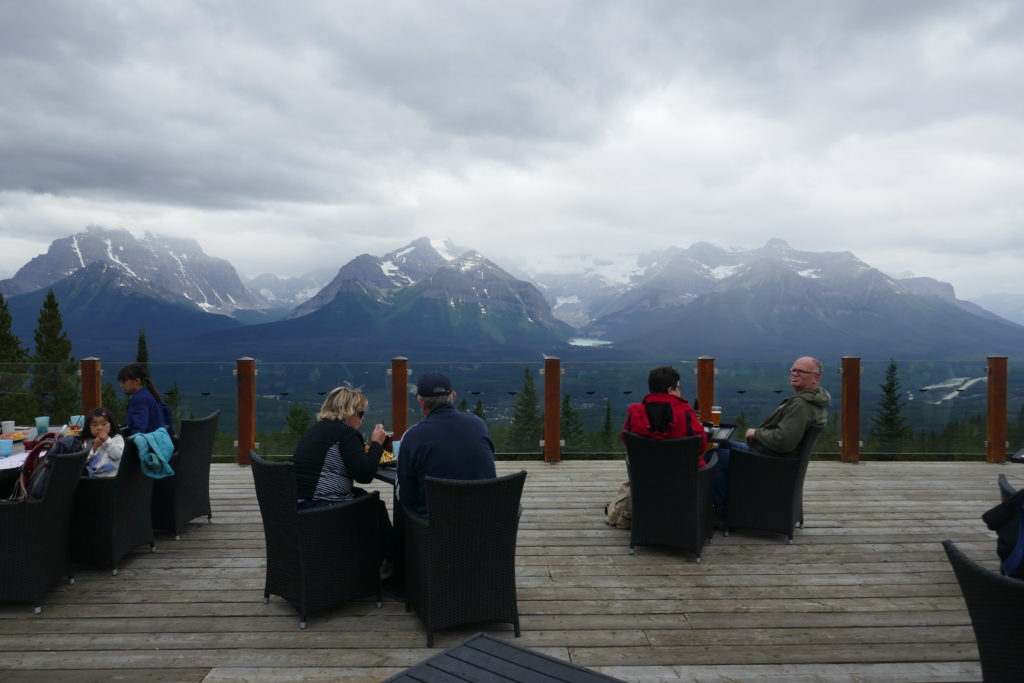 After stuffing ourselves with a hearty lunch, we headed down the hill and headed to Lake Louise. There’s actually another free shuttle that goes from the ski resort directly to the lake. Like many Calgarians, I’ve been to Lake Louise quite a few times. Basically any time someone comes to visit me. But that doesn’t make the lake any less stunning. Whether it’s a hot and sunny day or in the middle of the deep winter, Lake Louise is always beautiful.

At this time of year, the lake is very busy. Parking is at a premium, and even if you drive to the park, I recommend that you park in the overflow lot and take the shuttle up.

One of the coolest things about the lake is that it’s universally beloved. Â This particular time, I sat in one spot and listened to people from all over the world gushing over the lake’s beauty. I don’t think there’s anything quite like watching people see the lake for the first time. 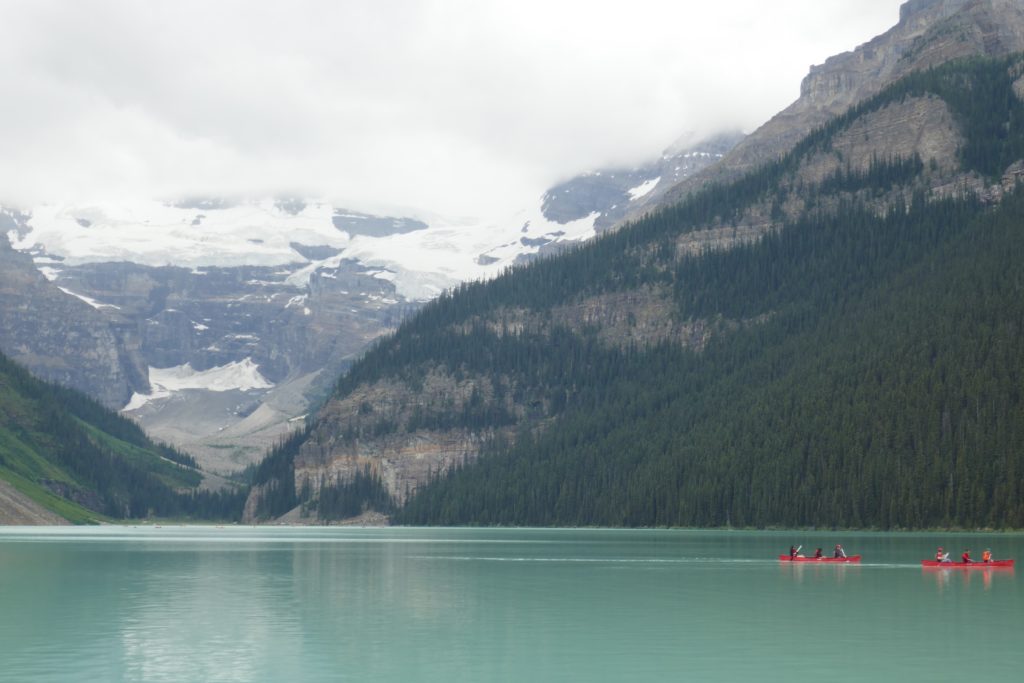 For many, it’s a lake that they’ve only dreamed about seeing and this may be there one and only time they’ll ever see it. It’s definitely something I think I don’t appreciateÂ sometimes. So hearing people laughing from their red canoes, smiling for selfies, even splashing in the lake’s frigid waters was just so fun toÂ witness

From there, there was another free shuttle back to downtown Lake Louise, then a last one back to Banff.

And Banff, well I hopefully you know, Banff is magical. I don’t think I’ve ever gone and not found a new thing to love about it.

One of my favourite areas as of late is around the Banff Canoe Club, where you can rent canoes and enjoy a calmer part of the Bow River. 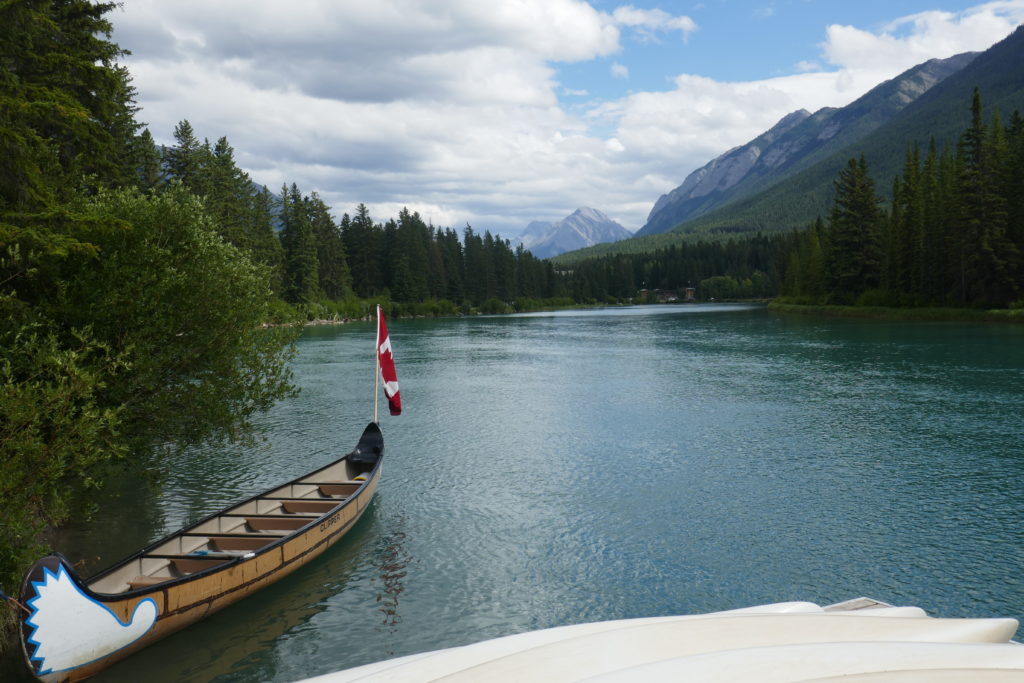 We spent the rest of our day walking around Banff, enjoying the sights and sounds of a busy, yet small, mountain town. The sidewalks were packed with people, enjoying all the things that Banff has to offer! 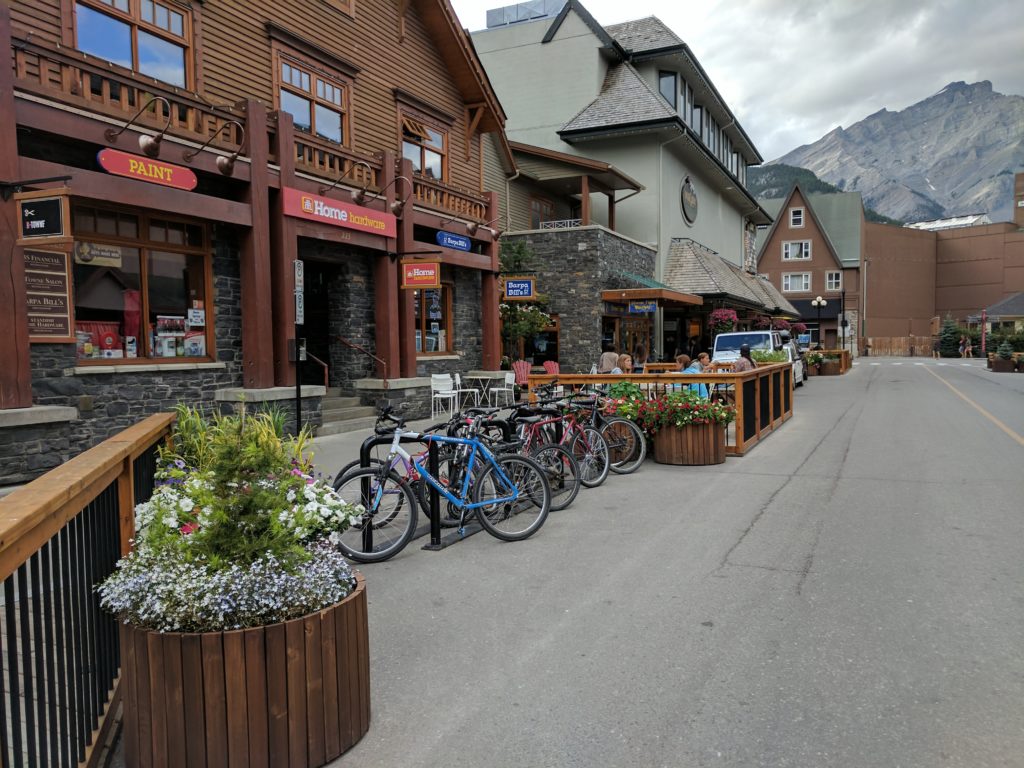 By the time we were done eating and shopping, we were exhausted, but we had a blast. So we purchased our $10 tickets back to Calgary, and spent the next hour or so watching the sunset over the rocky mountains. Not a bad way to spend a Saturday.

It may seem like a lot of hopping on and hopping off, but it would have been no different if you were in a car, and the shuttles actually make for a better trip because you aren’t stuck navigating jam-packed parking lots and long lines up.

I’ll be honest, me and shuttles don’t always get along. Â I get nervous that they’ll be late, or you won’t be able to find it. But literally every trip we took that day was so easy. There was a ton of options and times to get around, and everyone we talked to knew exactly what was going on. Â I couldn’t wipe the smile off my face, just because it was so easy to get around. Â Instead of worrying about finding parking, paying for parking and traffic, I was instead able to relax and just have an amazing time enjoying Canada’s most beautiful national park.

The On It Shuttles run every Saturday and Sunday for the rest of the summer. Right now, it’s in a pilot phase, but I really do hope that it’s something that sticks around. Â The service works for so many different types of people and makes enjoying the mountains easier than ever! 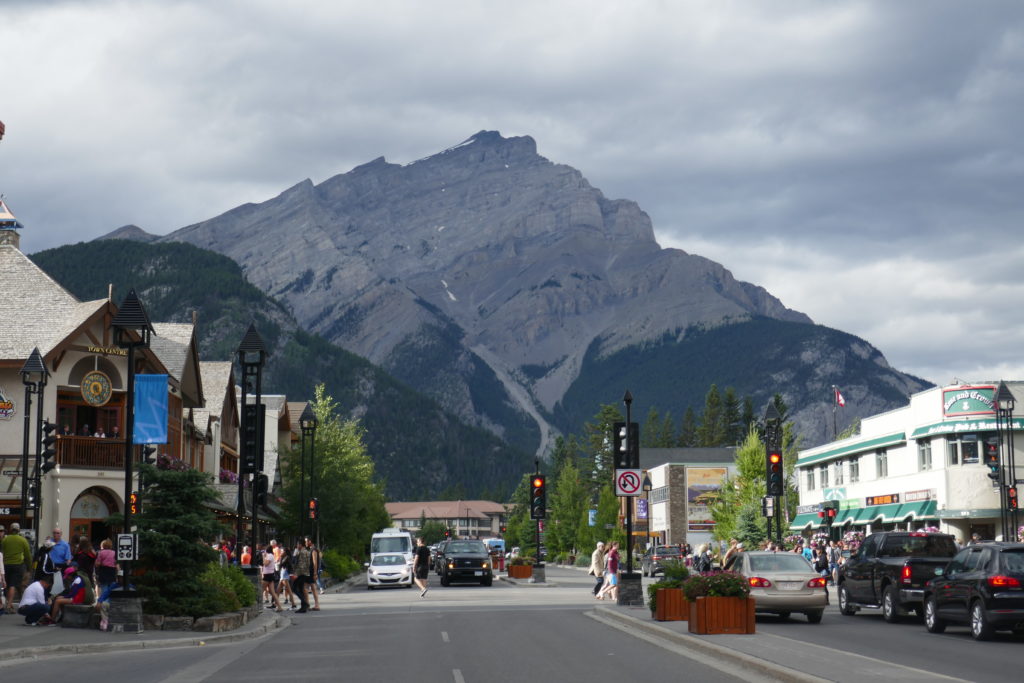