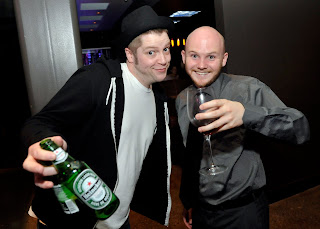 The most amazing thing happened last night, I got invited to a classy event. I know it was classy because there was an open bar. Where I’m from, that usually means someone has died or someone is divorced, but here in Calgary, it apparently means that a new restaurant is opening.

The place is called WEST and it is being billed as a restaurant, bar and social club. It is located right downtown in Scotia Centre. I’m not an architecture major, so I won’t try to describe it too much, but it was freakin’ nice. Lots of great colours, different levels and the staff was a who’s who of people Abercrombie And Fitch wishes they could get! When the restaurant/lounge is fully opened it will be three stories tall and include a roof top patio.

My only complaint would be that there was way too many glass walls, I think I ran into about four of them. Although, I think this may have had more to do with the wine, then the actual placement of the walls.

I can comfortably say that this place will put the final nail in the coffin that is the depresingly overrated Earls/Fuel resto/lounge. Thankfully.

photo: James Callsen (X92.9) and I. Taken by robin kuniski